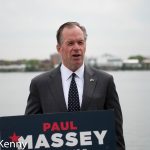 Republican mayoral candidate Paul Massey held a press conference today opposing some of Mayor Bill de Blasio’s policies and positions and offering some broad criminal justice suggestions.  Standing on the Bronx shoreline in Barretto Point Park, with Rikers Island directly behind him, Massey proposed criminal justice reforms including a “comprehensive review of sentencing guidelines and judicial practices that particularly disadvantage black and hispanic New Yorkers.”  He spoke of rebuilding the facilities on Rikers Island, declaring that the current operations are a failure, but not endorsing the new de Blasio view of closing the Rikers Island jails and moving those operations to new and expanded jails around the City.  He also spoke of addressing  the plight of defendants held in Rikers for extended periods before trial.

He harshly criticized Mayor de Blasio’s relationship with the NYPD, as well as the Mayor’s recent expansion of civil penalties, as an alternative to criminal charges, for quality of life crimes such as public drinking and urination.  He struggled to respond to many of the detailed questions posed to him by reporters, however.  Responding to the only election related question posed, he professed indifference to the prospect that some Republican county organization endorsements may go to his rival, Nicole Malliotakis, this week.

In his opening statement Massey declared keeping New Yorkers safe to be the most important priority for any mayor, and pledged to do so.  He criticized Mayor de Blasio, offering that higher crime numbers in portions of the Bronx “are a sign of things to to come if New York continues the path Mayor de Blasio has charted.”  He called de Blasio hostile to police, saying that New York is safer in spite of, not because of, Mayor de Blasio.

Asked several times about his statements about the importance of enforcement against quality of crimes such as public drinking and urination, Massey was non-committal about what the appropriate penalties are.

When I asked whether he supports efforts to end cash bail, at least for certain offenses, Massey again avoided a direct answer only offering that it needs to be looked at and improvements made.  He similarly did not give a direct response on City Council efforts at creating a bail fund financed by the City.  He did say that he’s read the Lippman Report and seems to share significant elements of its analysis, although he rejects its conclusion that Rikers should be replaced by jails around the City.

When I asked about the endorsements of the Manhattan, Bronx and Brooklyn Republican county organizations he said he would not speculate on what they’ll do.  He didn’t respond to my question of whether it would be worrying for his campaign if some or all of those endorsements go to rival candidate Nicole Malliotakis, but instead offered that he’s a “consensus, coalition building candidate.”

The press conference finished somewhat awkwardly as his staff tried to end it after about 17 minutes of questions from the four reporters present.  Massey took the final question despite his staff’s effort to end it, answering briefly before departing with a “thank you all for being here” as a moored metal barge creaked and groaned.