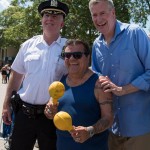 Orchard Beach, once nicknamed New York City’s Riviera for its broad crescent beach, hosted a visit from Mayor Bill de Blasio and NYPD Chief of Department Jimmy O’Neill this afternoon.  de Blasio and O’Neill, named by de Blasio as the next NYPD Commissioner, inched their way along the boardwalk for about 45 minutes posing for pictures with a steady flow of well-wishers.

It was a very positive reception for the pair, with no vocal negative reactions apparent.  de Blasio, readily recognizable, maintained a steady refrain of “have you met our new commissioner” as he exchanged pleasantries with the stream of people approaching him.  O’Neill appeared to enjoy the walk, although he was less absorbed in it than de Blasio. At times O’Neill, in uniform and still the highest ranking service member of the Department, appeared equally absorbed in what he’s done for decades – watching the goings-on around him and the operation of his Department. 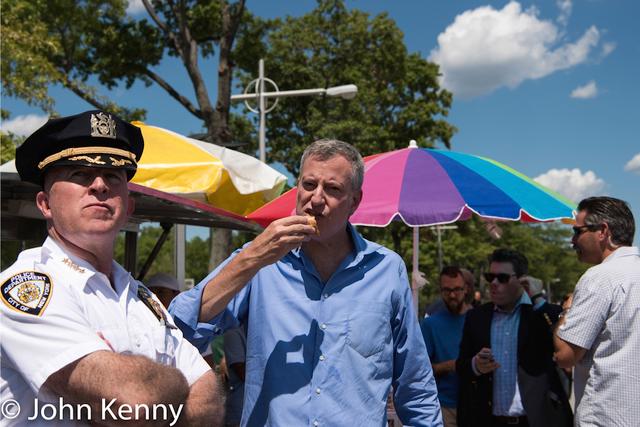 Mayor de Blasio and his administration face a very large transition in Commissioner Bratton’s departure, larger than in any other commissioner replacement.  Bratton arrived as a dominant public figure, well-known to New Yorkers from his prior stint as New York’s police commissioner and enormously comfortable in the public eye, and his public visibility has dwarfed that of all of de Blasio’s other commissioners.  O’Neill is a very well regarded chief, but largely unknown to the public and a very different persona than Bratton.  He may well succeed in both managing the NYPD and in the larger public role that comes with being commissioner, but his tenure will undoubtedly be very different as he moves into the post-Bratton vacuum.

This very small moment in O’Neill’s rollout as commissioner and de Blasio’s simultaneous lead up  to a reelection campaign was a success, moving both efforts incrementally forward.  As they departed de Blasio commented to O”Neill on the warm reception, optimistically emphasizing that “they want you to succeed.” 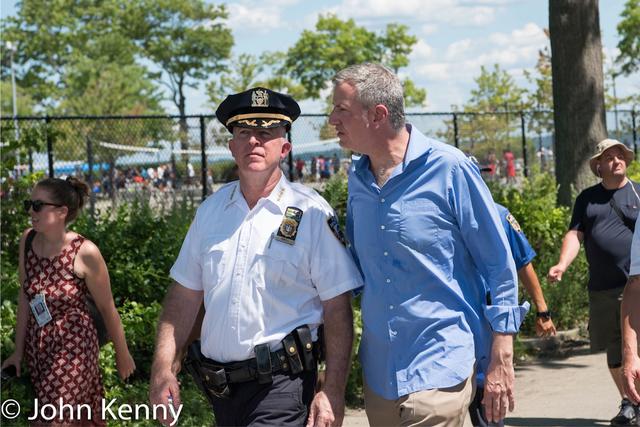