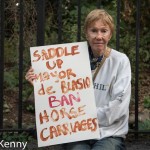 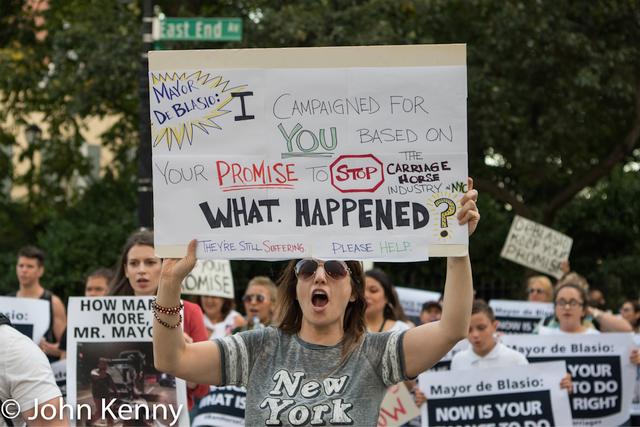 END_OF_DOCUMENT_TOKEN_TO_BE_REPLACED


Proponents of a ban on horse drawn carriages rallied on the steps of City Hall Monday.  As has been widely reported, Mayor de Blasio’s action on his campaign pledge to implement a ban “immediately” upon taking office has been slower than promised.  Opponents of a ban have been increasingly visible, mounting a significant public relations efforts and raising some uncertainty about the prospects of an expected City Council bill.

Our prior coverage includes a look at the Mayor’s promises and coverage of NYCLASS’s 2013 mayoral candidate forum.


Bill de Blasio has, on multiple occasions, expressed his support for banning carriage horses but as mayor has not yet taken any public action toward a ban.  We look at some of his past statements and discussions with the advocacy group NYCLASS, carriage drivers and reporters.


Today NYCLASS hosted a mayoral candidate forum, with Tom Allon moderating, focused on animal rights.  It was a lively forum, with both the candidates and the audience engaged and energetic.

We’ll have lots of coverage, but we’ll start you with this brief snippet of Sal Albanese and John Catsimatidis.

Here is the full discussion around carriage horses.  Only Bill de Blasio calls for a full immediate ban, while the others express concerns around the economic impact on the drivers.  All, however, were ready, willing and able to criticize Christine Quinn for her impeding council action on this issue.

John Catsimatidis, the “Cat Man” as he has dubbed himself, was the sole Republican candidate to attend the NYCLASS forum.  Here are two clips of the Cat Man; his opening statement and his answer to a question on the fate of horse-drawn carriages in midtown Manhattan.  We’ve selected these for two reasons:  First, there are a number of funny moments, some intentional, some not.  (“My kids were raised in Central Park” (not allowed in the house?) and, without evident humor or irony stating that “there’s no free rides” for the horses, make me laugh aloud.)  Second, watching a first-time candidate make his way through unfamiliar policy issues and governmental processes while trying to connect with voters is worth watching, both in these brief moments and in the broader campaign.

Christine Quinn, despite not attending the forum, received significant attention.  She has a fraught relationship with NYCLASS and the organized animal rights community, as shown in these excerpts.