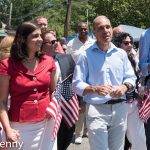 Expected Democratic and Republican mayoral candidates de Blasio and Malliotakis shared a stage for the first time since Malliotakis declared her mayoral candidacy.  They were cordial, although with an awkward moment or two.  Their greeting consisted of a de Blasio hug and kiss while Malliotakis responded with an awkward arm pat and a handshake.  They chatted amiably for a moment as they sat one seat apart awaiting the opening ceremony.  Mayor de Blasio had the opportunity to address the crowd, speaking for about five minutes.  Malliotakis, like all of the other electeds (other than BP Jimmy Oddo) was introduced but not invited to speak.

Malliotakis, de Blasio and the other electeds attending joined in a brief ribbon cutting and began the parade together.  Malliotakis quickly separated herself and marched separately, however. 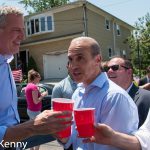 Overall it was a mostly positive reception for de Blasio, although with sporadic pockets of boos and thumbs-down from spectators.  He received reasonably frequent cheers and waves along the route, stopping to shake hands and say hello to spectators several times as the parade wound its way though the quiet suburban neighborhood.  In one of his warmest receptions a group of spectators served drinks to de Blasio, Oddo, Stringer and McMahon during a brief stop.  “Orange juice!” proclaimed the mayor and his hosts, although circumstances suggested that the red plastic cups may have contained more than just orange juice.