We caught up with Republican/Conservative mayoral candidate Nicole Malliotakis in the midst of her 5 borough campaign day Saturday, talking briefly about campaign stops that day and the notion of the forgotten borough. 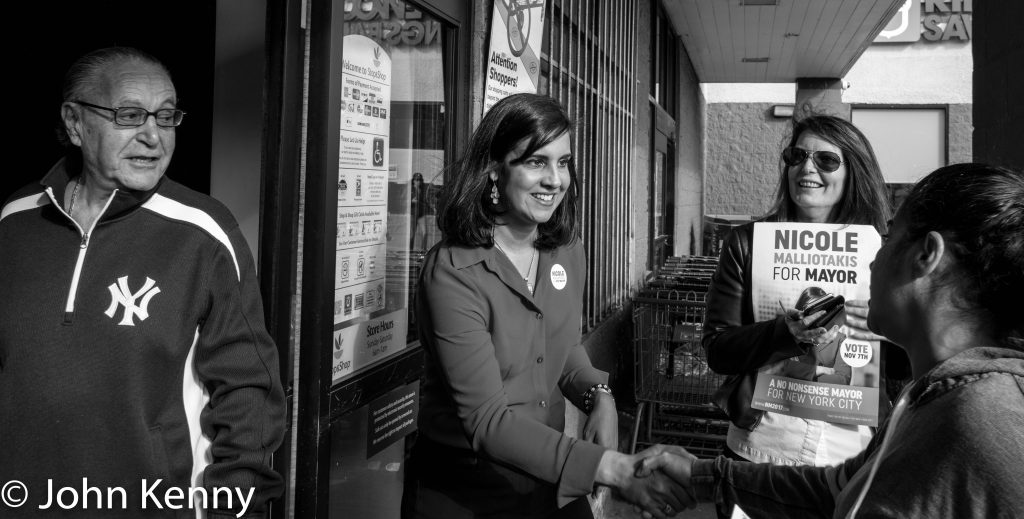 Seeking a quick snapshot of current voter issues I asked Malliotakis what issues people had raised with her on campaign stops that day.  Transportation and traffic, she replied, sliding into a criticism of the de Blasio administration for forcing policies onto boroughs and neighborhoods in a “one size fits all” approach.  (Her sample may have reflected that one of her stops Saturday was receiving the endorsement of the Queens Public Transit Committee.)

Malliotakis is from Staten Island, long nicknamed the “forgotten borough.”  While it easily could be forgotten and overlooked in City affairs primarily due to its very small size, Staten Island politicians have worked across party lines to promote Staten Island’s interests and political profile.  When I asked Malliotakis which borough really deserves the moniker she replied that all of the  major* boroughs feel neglected but that Queens feels “battered” by the de Blasio administration.

We spoke as Malliotakis campaigned at a Stop & Shop in Elmhurst.  Here’s our exchange:

At NYTrue.com we prefer to use “major boroughs.”