Democratic candidate Bill de Blasio, Republican and Conservative candidate Nicole Malliotakis and independent candidate Bo Dietl jousted, interrupted, ignored and even debated each other last night, participating in the first of two candidate debates mandated by the Campaign Finance Board. 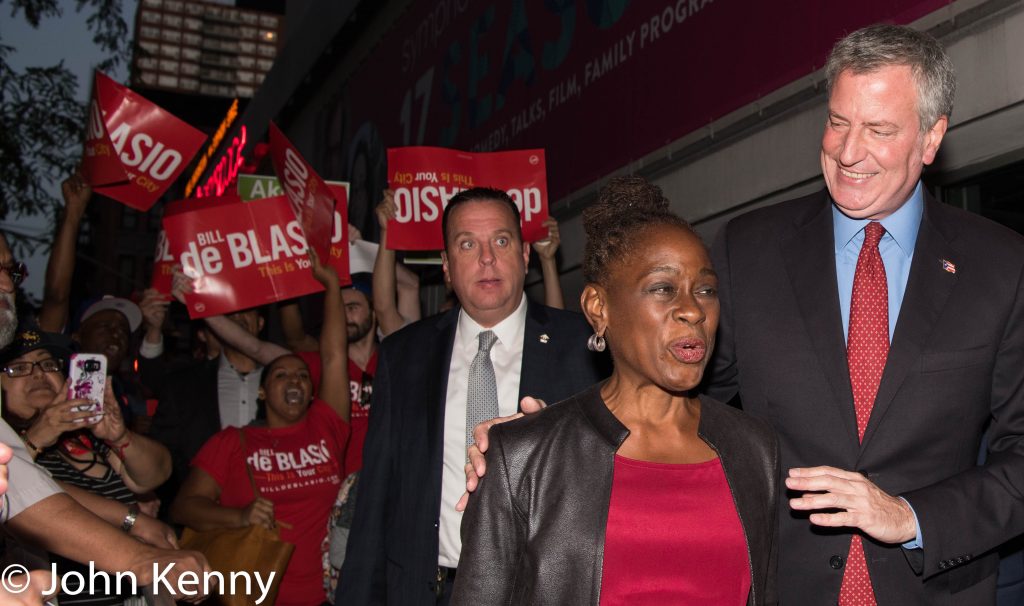 It was a loud scene outside the Upper West Side’s Symphony Space ahead of the debate.  A few hundred people milled about, with ticket holders, press, candidate staff and others mixed in with a group of about 75 de Blasio supporters and handfuls of Dietl and Malliotakis supporters as each group chanted and shouted in support of their candidate.

There was limited post-debate candidate availability, with Bo Dietl the sole candidate who engaged with the press.  de Blasio and Malliotakis each left through a side door, de Blasio giving a silent thumbs up and Malliotakis only saying “I think it went very well, thank you” when asked about the debate.  de Blasio did send out former city council speaker and 2013 mayoral candidate Christine Quinn and Council Member Antonio Reynoso as surrogates.

Here’s an excerpt as Chris Quinn reacts to my largely inaudible questions of whether being at the debate provoked any nostalgia for campaigning and whether she thinks she’ll ever again  run for office:

Our photo gallery is available here.  The debate organizers and hosts did not permit photos inside the hall, so our photos are only from the  pre-debate activity outside the hall.