Republican mayoral candidate Paul Massey held his first press conference today, launching harsh attacks on Mayor Bill de Blasio and sparring with the press.  Massey has been in a slow launch of his campaign, with a limited number of public appearances and no press conferences until today.

Speaking on the steps of City Hall, Massey read a lengthy prepared statement focused on the reported six ongoing investigations examining various actions of Mayor de Blasio and his administration.  Declaring that de Blasio “is corrupt” and has “sold out New Yorkers”, Massey urged that a seventh investigation begin to examine the mayor’s plan to create a legal defense fund to pay his personal counsel and seek outside contributions for that fund.  Massey said that he has written to U.S. Attorney Preet Bharara and Manhattan D.A. Cy Vance calling for such an investigation. 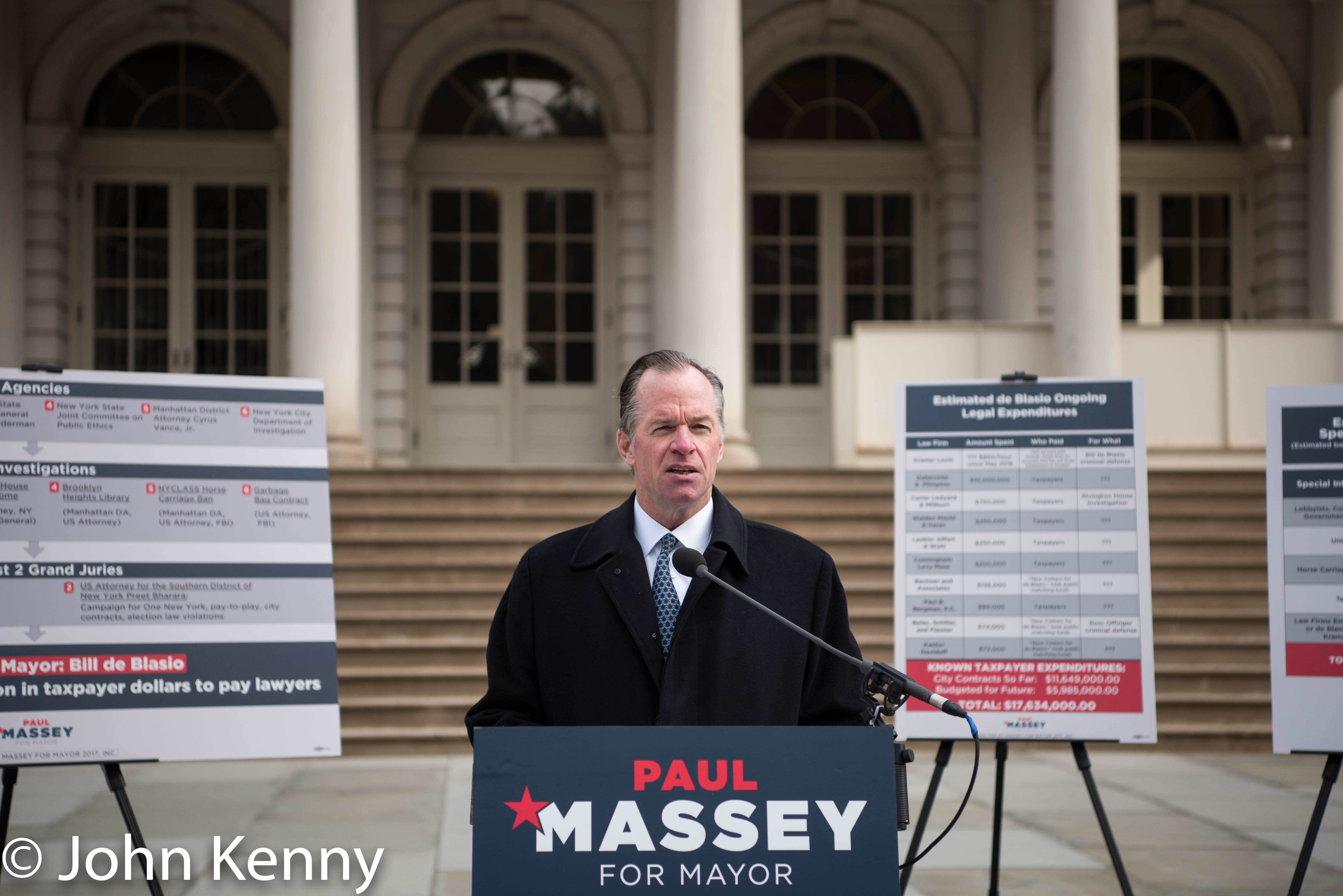 Although he’s cordial and seemingly interested in substantive engagement Massey had a somewhat rough time with the press.  On arriving Massey introduced himself individually to the full complement of waiting press and, as he began the Q&A, politely asked that reporters identify themselves as “that would be helpful to me.”  While he’s fully immersed in de Blasio’s troubles and can readily and fluently discuss them he’s less fluent in many City issues, however.  When pressed on stop & frisk Massey spoke of needing to “see what the best police practice is gonna be”, before acknowledging that “I haven’t established an answer.”  His apparent unfamiliarity with a central issue of the 2013 campaign and the first year of Mayor de Blasio’s term was striking.  When pressed for details about how he would address the growing homeless population he only offered that he will “put a team in place” before taking office to address it and offered little on how he would better manage the City’s shelter system.

I asked Massey (at 9:45 of the Q&A) about the seeming inconsistency between his condemnation of Mayor de Blasio’s fundraising and Massey’s own political contributions of more than $100,000, including a “maxout” contribution of $4,950 to Bill de Blasio in October 2013.  He didn’t offer much of a distinction, only saying that “all campaign contributions I’ve made within the limits of the law” and characterizing himself as “disappointed” in the mayor.  “I was hopeful” Massey replied when I asked specifically about why he contributed to de Blasio.

Our photo gallery of Massey’s press conference is here.