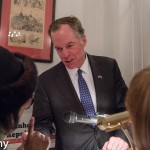 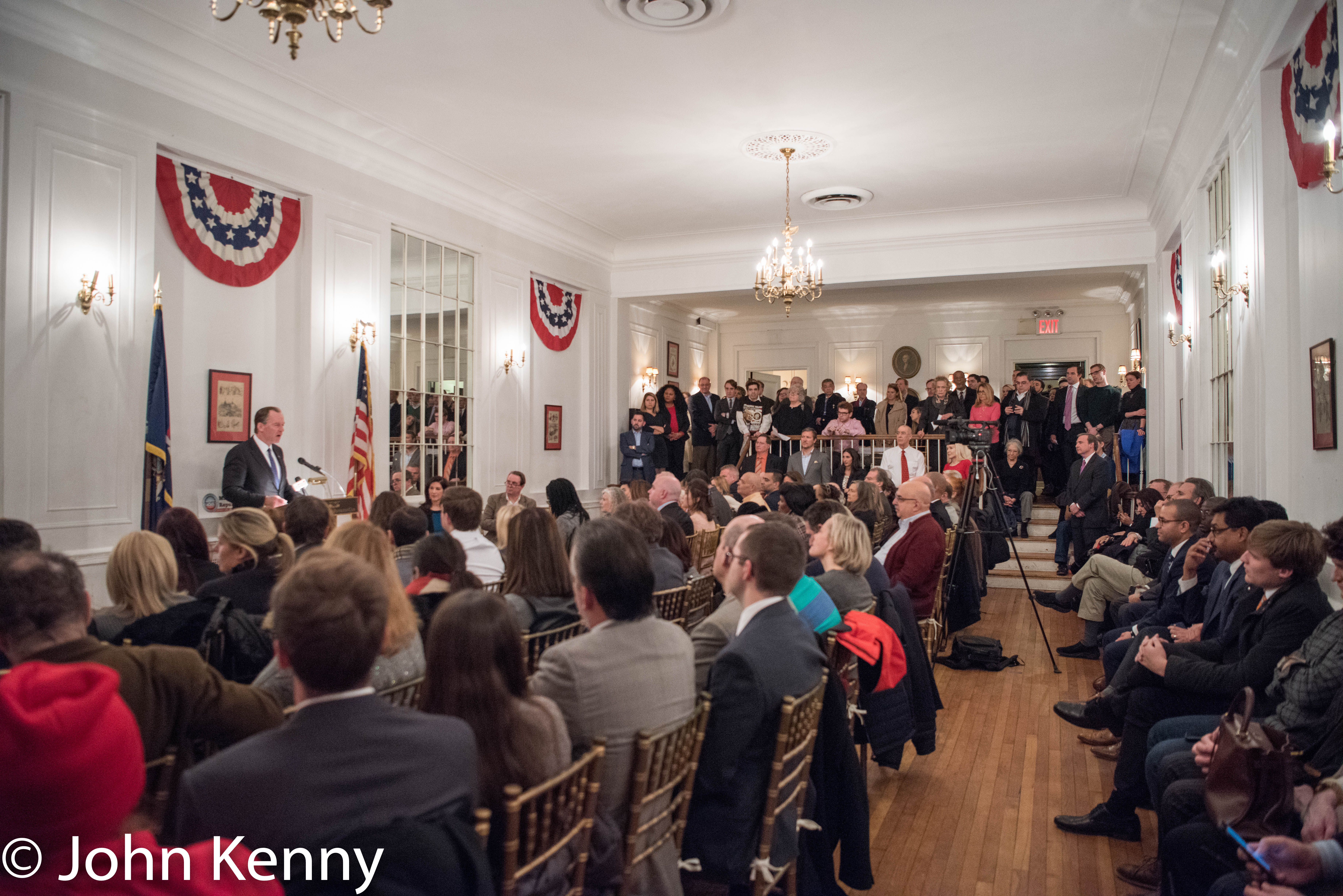 Massey is in the process of a campaign “soft launch”, beginning public campaign appearances without yet holding a large kickoff event.  He filed papers last summer legally launching his campaign, but he’s had limited public appearances until recently.  Massey styles himself as a Bloomberg-esq candidate; wealthy following a successful business career and eager to apply his management skills to City government.  Born and raised in Boston like Bloomberg and de Blasio, Massey has worked in the real estate brokerage business in New york City since college.  In 2014 he sold the company that he co-founded to Cushman Wakefield.

In his speech and a subsequent audience Q&A Massey repeatedly described de Blasio as corrupt, lazy and incompetent, declaring that the City faces a crisis in leadership.  He and his audience were fully in sync on those views.

Massey expressed many views that were not as in sync with his audience, however.  He repeatedly spoke highly of immigrants, offering support for stopping would-be immigrants only in terms of assuring security.  His audience was silent when, as part of attacking de Blasio as a “divider” Massey said to them “you love diversity.”  His statement in support of increases in the minimum wage was met by shouts of “no, no, no.”  Massey shared a harsh view of the City’s homeless shelter system, but his approach of improving and expanding that system is likely not widely shared by his audience.

Massey was  critical of de Blasio’s efforts at increasing “affordable” housing, but unlike many Republicans he appears in favor of more, not less, government effort at increasing the supply.  By Massey’s description, his real estate industry experience will enable him to quickly and effectively expand the City’s affordable housing.  He went so far as to declare that the City needs 400,000 to 500,000 new housing units (but apparently not just “affordable” units).  He did not mention Donald Trump in his speech and, when asked about Trump by reporters afterwards, distanced himself.  In contrast, the audience had cheered enthusiastically at mentions of Trump by an introductory speaker.

Massey also addressed his viability as a candidate, touting his fundraising and his selection as the Independence Party candidate.  He accurately noted that he raised more than Mayor de Blasio in the most recent six month fundraising period.  Unfortunately for Massey he also spent more than de Blasio, spending significantly more than Massey raised.  His fundraising haul of $1.6 million was more than consumed by spending of $1.96 million on a long list of consultants, with his campaign financially solvent only because Massey provided more than $1 million of his own money.   In his speech Massey said that he planned to “put a lot of my own money into” the campaign, without committing to a specific amount, and declaring that he will not fully self-fund.  He lauded Bloomberg’s integrity, declaring that no one could “buy” the self-funding billionaire, setting himself as Bloomberg’s successor on that point despite raising such a significant amount in contributions.   While he’s demonstrated strong fundraising ability, to campaign through September or November he’ll have to either dramatically increase his intake or control his spending.

Massey touted his endorsement by the Independence Party as evidence that his is a true “fusion candidacy.”  That’s certainly true nominally; he’s the candidate of one party and seeking to be the candidate of a second party, but the Independence Party has had its own share of troubles.  (Among those troubles is its role as a conduit for Michael Bloomberg’s $1.1 million payment in 2009 for “poll monitoring” that sent Republican operative John Haggerty to jail.)  It mostly cross-endorses candidates, varying between supporting Democrats and Republicans.

Massey received an overall warm welcome, with dozens of audience members sticking around after his speech to say hello and encourage him.

Massey is a plausible candidate with multiple strengths but he may be somewhat out of tune with the current Republican mood.  Republican primary voters, assuming early Republican efforts at avoiding a primary do not succeed, may not be so receptive to the more centrist notes Massey strikes.  The Republican primary electorate appears, very preliminarily, to be energized by Trump’s win and that energy may look for a more strident candidate.  Massey, while appearing to fully buy into the notion that de Blasio has turned New York into a hell-hole, comes with less strident solutions and a more inclusive tone than Trump-inspired Republican voters may want.