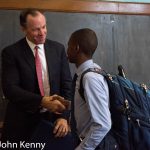 Massey moved a bit slowly as a student guided him around Cristo Rey, walking with a cane as he recuperates from hip replacement surgery just over a week ago.  He went up and down several flights of stairs with little apparent discomfort, however, and any physical discomfort did not appear to distract him from engaging with the students, teachers and staff  he encountered.  Joshua Thompson, an erstwhile Democratic mayoral candidate recently hired by Massey, accompanied him and took a lead role in the post-tour discussion with a group of ten students.

Massey’s ability to respond to policy questions and issues is improving, but he continues to avoid substantive discussion on many topics.  When asked about the City’s current teachers contract, for example, he spoke of “bringing the parties together” but appeared to not have any opinion on whether it’s a good or bad contract for the City or any views on significant changes he would make.  Similarly, he offered nothing beyond generalities when I asked for his view on what increase the Rent Guidelines Board should approve for rent stabilized apartments.  (The board met today as it heads toward a June 27th vote on this year’s increase.)  It’s a real weakness for Massey, contributing to unease by many Republican leaders around Massey’s candidacy.

Among the other topics in the Q&A were Massey’s voting record, potential additional mayoral candidates, his fundraising, release of his tax returns and immigration enforcement in City schools.

NY1 recently reported that Massey voted only five times in a 19 year period.  Massey, while saying that he believes people are not focused on his voting record, offered only that he worked long hours for many years and therefor often was unable to get to the polls.   He professed to be unconcerned by the potential entrance of Bo Dietl and John Catsimatidis or Nicole Malliotakis, describing them as “good New Yorkers,” and quickly pivoted to attacking Mayor de Blasio.  When asked by NY1’s Grace Rauh Massey said that he has an extension through mid-October for filing his 2016 tax return and that he’ll release it when filed.  Pressed on past returns, Massey said that he will release past years now, although without specifying which years.

Here is the full press conference Massey held after his tour and student discussion: