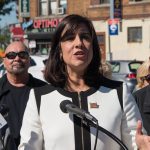 Malliotakis was replying to my question during a press conference this morning in Ridgewood.  Malliotakis held the press conference to call for implantation of “Smart Light technology” throughout the City.  Such technology involves using a variety of sensors and artificial intelligence to actively manage traffic signals with a goal of improving traffic flow.  That’s a goal broadly shared with the various congestion pricing ideas proposed, which seek to limit Manhattan traffic congestion by charging drivers a fee to enter the busier parts of Manhattan.