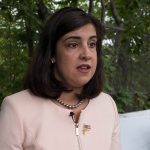 Republican mayoral candidate Nicole Malliotakis expressed optimism about her fundraising today, but had little information to offer.  Speaking at a Dyker Heights press conference, Malliotakis said “it’s going well,” but added “right now it’s a little difficult” due to people focused on graduations and vacations.  “I don’t know, I would like to know myself, I gotta talk to my treasurer” Malliotakis replied when I asked for a expected amount raised in her next campaign finance report.

Money is likely to be a deep problem for Malliotakis.  She raised a total of $94,000 in just over two weeks between formally becoming a candidate and her first filing date in mid-May.  (Mayor de Blasio reported raising $4.4 million, with $2.6 million on hand, as of that same filing date.)  That amount included about $10,000 from herself and her Assembly campaign committee, with the other contributions largely from “friends and family,” and not displaying any initial expansion from her past Assembly race contributors.  Her Assembly campaign committee has maintained a balance of between $100,000-$200,000 for the past few years, raising a calendar year peak of about $125,000 in 2014.  That’s been quite sufficient for her Assembly races, but it’s not remotely close to what Malliotakis needs for the mayoral race.

Malliotakis is trying to qualify for the City’s matching funds program, in which contributions of up to $175 from City residents are matched 6-1.  She needs to raise at least $250,000 (counting a maximum of $175 per contributor) from at least 1,000 contributors. Failing to qualify, which appears quite possible, will markedly reduce her ability to fund her campaign.