Republican/Conservative mayoral candidate Nicole Malliotakis rolled into El Barrio for a brief stop, holding a press conference today at the “Lucky Corner” of 116th Street and Lexington Avenue.  Dubbed the “Lucky Corner” after Fiorillo LaGuardia held election eve rallies there before his mayoral victories.  It’s a popular spot with candidates, both for its legend of luck and for its high foot traffic. 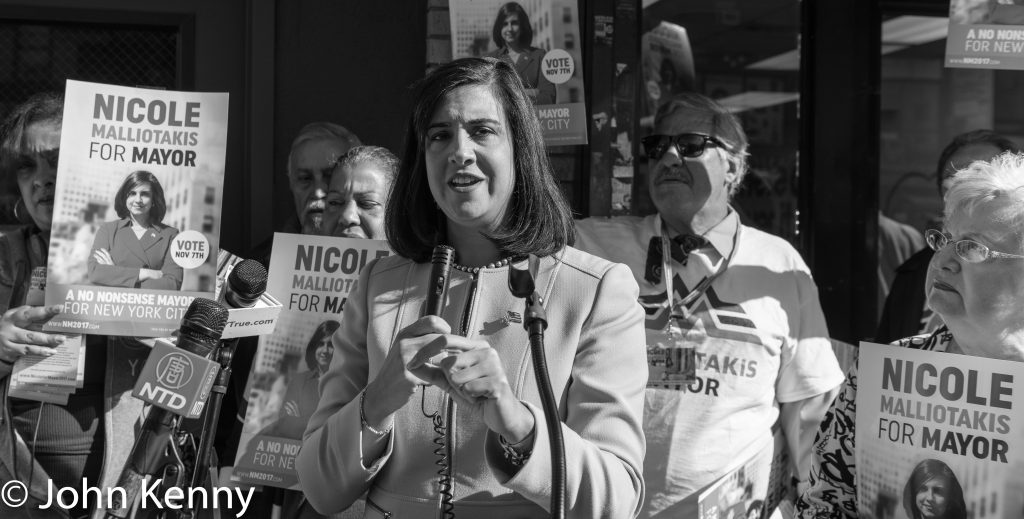 Malliotakis lauded residents of El Barrio while lamenting what she cast as some of the negative effects of the de Blasio administration.  She noted a decline in city contracts going to M/WBE businesses and pointed to problems in the Department of Education.  She also repeated a campaign theme, that Mayor de Blasio has exacerbated income inequality, but ultimately landed on her main pitch; that City government is poorly managed by Bill de Blasio and that she’ll provide meaningfully better management.

Malliotakis had 20 or so supporters with her, but appeared to draw minimal attention from passersby.  Several people did have lengthy questions for Malliotakis after she concluded, but she departed without any retail campaigning or other activities in the neighborhood.  Any electoral hope for Malliotakis requires significant expansion beyond the vastly outnumbered Republican base, and expanding her reach in Harlem would certainly help Malliotakis.  Today’s visit alone won’t have any meaningful impact but it remains to seen whether in the 20 days remaining Malliotakis can generate any Harlem interest and enthusiasm for her campaign.

Here’s video of Malliotakis’s portion of the press conference, including her remarks and press Q&A.  Several other speakers are not included.