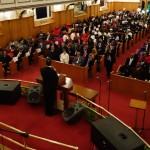 Is Assembly Member Karim Camara’s pending Cuomo administration appointment constitutional?  There’s a section of the New York State Constitution that appears to say no and to prohibit his appointment as executive director of a yet-to-be-created “Office of Faith-Based Community Development Services.”

For background, Camara is a member of the New York State Assembly, representing Brooklyn’s 43rd Assembly District.  First elected in 2005, he was reelected in 2014 and is a current member of the Assembly.  In October 2014, Governor Andrew Cuomo announced his intention to create an “Office of Faith-Based Community Development Services.”  On January 18, 2015, Cuomo announced that he intends to appoint Camara as executive director of that office.  It’s my understanding that, as of yesterday, Camara remains a member of the Assembly and his anticipated new office/position has not yet been created.

The possible constitutional prohibition on Camara’s appointment arises from two particular facts:  First, Camara is a member of the current, newly seated legislature with “the time for which he … was elected” continuing through December 2016.  Second, his new position will be created in February 2015 (or later), which falls within “the time for which he … was elected.”  (We’re also presuming that Camara’s new position is a “civil appointment” as used in Article III Section 7.)

Even if Camara resigns from the Assembly before the office is “created”, the plain meaning of the relevant Article III Section 7 sentence appears to prohibit the contemplated appointment.  That plain meaning says that a legislator can’t accept an appointment to an office created during the term that legislator was elected to (January 2015 to December 2016 for Camara).  It is not limited to prohibiting a legislator from accepting an appointment to an office created while such legislator is a sitting member.  The latter interpretation requires ignoring the deliberately included clause “during the time for which he … was elected.”  That clause would not be necessary if such prohibition only applied to currently sitting legislators.

In a brief exchange yesterday, a Cuomo administration spokesperson appeared to interpret this provision as only restricting Camara from accepting an appointment to an office created while he is a sitting member of the legislature, and not applying to an office created after his resignation but during the two year term he was elected to.  We’ll try to get a more extensive legal analysis from the Cuomo administration and update you if we do.

We’re also still looking at how this provision has been interpreted by New York courts, and it’s certainly possible that they have not adopted our analysis.  We’ll update you with any further research results.

N.B.  It’s worth noting that a separate sentence of Article III Section 7 generally allows legislators to accept state government appointments (subject to the restriction we’re discussing) but expressly provides that “acceptance thereof shall vacate his or her seat in the legislature.”  The inclusion of this sentence in Section 7, prohibiting dual service in the legislature and executive, supports the view that the “during such time” sentence creates a broader prohibition.

§ 7. No person shall serve as a member of the legislature unless he or
she is a citizen of the United States and has been a resident of the
state of New York for five years, and, except as hereinafter otherwise
prescribed, of the assembly or senate district for the twelve months
immediately preceding his or her election; if elected a senator or
member of assembly at the first election next ensuing after a
readjustment or alteration of the senate or assembly districts becomes
effective, a person, to be eligible to serve as such, must have been a
resident of the county in which the senate or assembly district is
contained for the twelve months immediately preceding his or her
election. No member of the legislature shall, during the time for which
he or she was elected, receive any civil appointment from the governor,
the governor and the senate, the legislature or from any city
government, to an office which shall have been created, or the
emoluments whereof shall have been increased during such time. If a
member of the legislature be elected to congress, or appointed to any
office, civil or military, under the government of the United States,
the state of New York, or under any city government except as a member
of the national guard or naval militia of the state, or of the reserve
forces of the United States, his or her acceptance thereof shall vacate
his or her seat in the legislature, providing, however, that a member of
the legislature may be appointed commissioner of deeds or to any office
in which he or she shall receive no compensation.