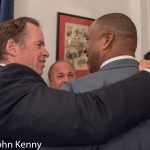 Faulkner had some less friendly comments later in the evening, including a harsh critique of Massey for having made a “maxout” contribution of $4,950 to Bill de Blasio in 2013.  Yes, that Bill de Blasio.  (I asked Massey about this in February – our exchange is available here.)  Faulkner’s comment sparked an exaggerated response from Bo Dietl.  A look of horror spread across Dietl’s face before he stood up and then sat back down while clasping both hands over his mouth.  Massey sat stone faced, glancing over at Faulkner but not offering any other reaction.

When speaking with the press afterwards, Faulkner responded to a question about Massey with “he’s from Larchmont, he’s a limousine liberal.”

There may well be some genuine affection between Faulkner and Massey but the large campaign pressures they face can readily overwhelm any genuine affection.  Those pressures are increasing as the calendar progresses and more candidates enter the race.  Massey’s plan to lockup the nomination without a primary included either pushing Faulkner out of the race or simply running over him, but neither has happened.  His public friendliness made sense, a kill-em-with-kindness approach that avoided nastiness that could ease the way for the county chairs and organizations to support Massey.  For Faulkner, his most recent financial reports show his campaign as insolvent.  With attention for the overall mayoral campaign increasing markedly as Massey falters Faulkner has a chance, but must capitalize on that chance quickly.  Faulkner’s vision of the path to capitalizing appears to include both grabbing attention with a Massey spat and further weakening Massey through those attacks.

Here’s a clip from Faulkner’s April 6th appearance at the Queens Village Republican Club.  Without naming Massey Faulkner bitterly complains about the expectation by many that Massey’s vastly superior funding is reason enough to choose Massey.  Faulkner also says that in view of Massey’s failure to support Donald Trump “I’m sorry, I’m not voting for you.”