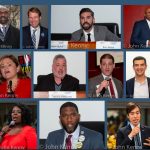 Candidates rejected by the Board of Elections have the option of seeking a court order overruling the Board and placing them on the ballot, so further changes are possible.