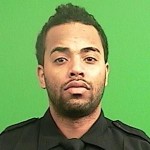 Any one of now-Detective Marcano’s actions Wednesday evening would be noteworthy and commendable.  In combination they are incredible.

First, while off-duty and sitting in a car with his girlfriend, he spotted a street robbery in progress, intervened on his own, without waiting for help to arrive, and was shot in the chest.  Second, while his girlfriend was driving him to a hospital they found themselves right behind the fleeing robbers.  (Here is where the video kicks in.)  Detective Marcano, shot in the chest and headed to a hospital, got out of his car and engaged in a gunfight with the robbers, fatally shooting one, all while holding one hand on his chest wound.  Finally, he walked to an ambulance that happened to be parked nearby, talked to the driver, appearing to show the driver his chest wound, walked around to the passenger side, opened the passenger seat door and climbed in the front seat.