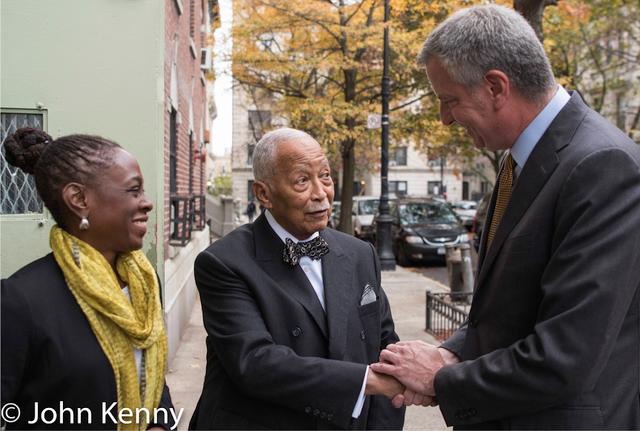 de Blasio and McCray joined Dinkins at Harlem’s Convent Avenue Baptist Church, with each speaking during the Sunday service.  McCray warmly introduced the former mayor, describing him as “my favorite mayor when Bill is not around.”  Dinkins returned the compliment, joking that without his former speechwriter McCray he doesn’t have a speech prepared (he did, of course).  Dinkins recounted how as he took office a minister told him that he would need to “bite bullets and butter biscuits.”  Dinkins characterized de Blasio as the type of leader who can do that, proceeding to laud de Blasio for accomplishments such as a rent freeze, universal pre-K, middle school after school programs, $15 minimum wage for City workers, paid sick leave and a dramatic reduction in stop and frisk.  Dinkins closed by saying that the importance of “good solid leadership” is even more important in the wake of Donald Trump’s election.

de Blasio drew laughs and cheers in noting that it is no longer said at Gracie Mansion that “behind every great man stands a great woman”, with “beside” now substituted for “behind.”   He credited Dinkins for beginning many of the improvements in the City over the past 25 years, critiquing an “airbrushing of history” that has covered over many of Dinkins’ accomplishments.  Without mentioning Trump by name de Blasio favorably contrasted Dinkins with Trump, saying that he “remember(s) when leadership meant dignity and respect for all”  and that Dinkins is evidence for the proposition that a leader “does not need to be harsh to be strong.”

de Blasio continued his recent role as a leading Trump foil, saying that we should never mistake Trump’s electoral victory for a mandate.  He characterized the post-election country as experiencing a national identity crisis as it grapples with whether to be pluralistic or exclusionary and divided.  de Blasio cast the City as a “powerful antidote,” inclusive and naturally tending toward respect for all faiths. 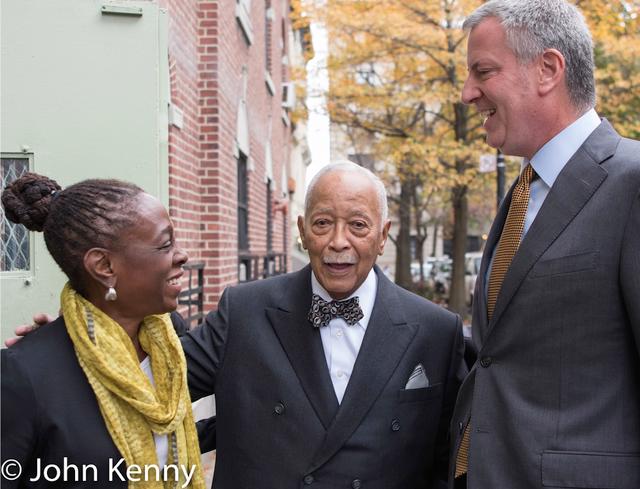 The only photos from todays appearance of Mayor Dinkins and Mayor de Blasio together are from a brief post-appearance photo op, as the two men and McCray stepped outside for the benefit of waiting press.  While press were permitted to watch and listen to the Mayor’s appearance, the Church would not permit the taking of any photos or video inside the church despite the apparent efforts of the Mayor’s campaign staff.  As I stood in the foyer listening and taking notes during their remarks one of the church ushers radioed a colleague about a man near the front of the audience: “check the guy in a green sweater, with a beard.  I think he’s taking pictures.”  A quick glance revealed that to be the Mayor’s campaign manager.