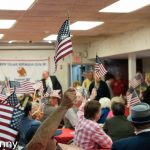 Malliotakis began her remarks with a shoutout and payment request to a soothsaying audience member.  As he introduced Malliotakis Club President Phil Orenstein noted that one audience member had yelled out “you should run for mayor” when Malliotakis spoke at the Club’s Lincoln Day Dinner in March.  “Charlie, you’re gonna give me $175 dollars for my campaign” she began.  “This is all your fault, you planted the seed” a smiling Malliotakis said to chuckles.

Malliotakis’ ten minute speech touched on her main campaign themes and illustrated her campaign personna.  A decline in the City’s quality of life is her overarching theme, with subway delays, public urination, crippling traffic and increasing numbers of homeless people on the street prime examples she offers of problems caused, or at least not adequately addressed, by Mayor de Blasio.  Providing “basic services” is a mayor’s primary job argued Malliotakis, saying that de Blasio is instead “off fighting a national ideological war.”

Malliotakis offered other criticisms, beyond quality of life issues, directed at the mayor.  Among those were the substantial increase in City spending, from $70 billion in Mayor Bllomberg’s last budget to the just-agreed $85 billion budget.  Malliotakis doesn’t offer any alternative, either in what she sees as the right overall spending amount or in any specific City budget cuts, however.  She mentioned increases in crime “in certain aspects,” offering an increase in rape/sex crimes of 15% and in human trafficking of 50% as examples.  It’s a tough criticism for all de Blasio challengers to maintain in the face of ever-improving crime statistics.

Malliotakis devoted some time to a current dustup; the decision by the Puerto Rican Day Parade to honor Oscar Lopez Rivera, co-founder of the FALN, and the decision of Mayor de Blasio to nonetheless march in the parade.  Malliotakis included criticism of her chief Republican rival Paul Massey for his reaction, although without mentioning him by name.  She characterized de Blasio as “weaseling his way out” of his initial support for Lopez Rivera, and criticized a “a lack of leadership” by both de Blasio and Massey.

By way of biography Malliotakis described herself as the child of immigrants, with a mother from Cuba and a father from Greece, who grew up spending a great deal of time in their family business in Sunset Park.  Her political biography mentioned favorite points; her early condemnation and call for resignation by Assembly Speaker Sheldon Silver, her efforts at toll reductions by the MTA on the Verazzano-Narrows Bridge, her lawsuit against the Port Authority over its tolls on bridges from Staten Island to New Jersey and especially her lawsuit against Mayor de Blasio seeking to prohibit the City’s destruction of records related to the IDNYC program.  She then tied her biography to a path to victory, saying that as a hispanic, relatively youthful woman she will be able to make a connection with substantial elements of traditional Democratic constituencies.

There was a very wide range of questions and comments in the Q&A, from outright declarations of support (without a question), to several supportive questions and a significant policy question built on a disagreement.  At the most challenging end of the spectrum, a man rose midway through the Q&A and characterized Malliotakis as being “dismissive” of two questioners.  On one of those questions Malliotakis was in fact initially dismissive but then rolled into a substantive discussion.  That question came from a Club member who posed the same question to Massey and Faulkner on their visits; do you support Second Amendment/gun ownership rights?  The questioner made clear each time that he believes that there shouldn’t be any restrictions on gun ownership and that he’s adamantly against New York City’s heightened restrictions on carrying handguns.  He noted in his question that Malliotakis voted for the SAFE Act.  (Anathma to most Republicans throughout New York State, the SAFE Act was pushed through the legislature by Governor Cuomo in the aftermath of the Sandy Hook massacre, adding a grab bag of additional restrictions and registration requirements and enhanced penalties.) Malliotakis’ immediate response was “if that’s your only issue you may not want to vote for me.”  She quickly recovered however, describing her vote as a response to combination of supporting the enhanced penalties included for killing a police officer and the quandary of the bill presenting an infrequent opportunity for a minority member to get any legislation passed.  When pressed on what she would do as mayor “to restore our Second Amendment rights” Malliotakis responded “I would enforce the law.”  She went on to offer some possible accommodation on the SAFE Act, but was clear that she doesn’t intend to seek any meaningful changes in gun laws.  Her answer likely did not satisfy her questioner, but it drew some applause.  It was also far more coherent and closer to typical Republican views that the answers offered by Massey and Faulkner during their visits.

Somewhat similarly, Malliotakis proclaimed herself as “personally pro-life” but appeared to disclaim any intention to change the law or act in a manner intended to prevent or restrict the legal right to abortion.  She readily agreed with a questioner asking whether she would build on the Giuliani/Broken Windows approach, returning to her overarching theme of quality of life issues as driving her campaign.

She sought a somewhat nuanced position on red light and other traffic cameras.  She said that cameras “in strategic locations” are acceptable but characterized the City’s current use and placement of traffic cameras as a “revenue generating scam” and a “cash grab.”  A discussion of what she sees as wrong with those traffic cameras, including a mention of her “75 year old mother who drives like an old lady” getting a speeding ticket, laid out some real-life impacts of the cameras which anger her constituents.  That led to an effective distillation of the view of many of Malliotakis’ constituents and audience on Mayor de Blasio.  Malliotakis described the “irony of Mayor de Blasio” as simultaneously seeking to decriminalize or legalize behaviors they see as worth punishing, such as public urination,  but “want[ing] to punish the punitive (sic) hardworking person that’s just trying to drive to work in the morning.”  That sentiment isn’t as hot or angry as the denunciations of the mayor as corrupt favored by Paul Massey, or the characterizations of him as a communist (Bo Dietl) or a Bolshevik (one of the questioners at QVRC), but it effectively captures a paradox that creates, or at least illustrates, a gap between de Blasio and a meaningful number of his constituents.

A supportive questioner opined that Malliotakis should have been much more aggressive towards Governor Cuomo on marching in the Puerto Rican Day Parade, noting that it took him two weeks to make a decision.  Saying that “they’re gonna go for your jugular” he urged Malliotakis to fight more aggressively.  Malliotakis responded, in part by noting that she has an okay relationship with Cuomo and that she’s not running against him.  This again captured part of Malliotakis’ personna; she offers plenty of criticism of the mayor, and some of the governor, but without the harsh personal elements that many of the Republican candidates and audiences incorporate.

When asked about the City’s property tax system, widely viewed as unfairly distorted and random in its assessments, Malliotakis made her only mention of a recent campaign line.  Noting that she pays twice the amount of property tax as the mayor on a home worth half as much, Malliotakis referenced “economic refugees” leaving the City because of the cost of living.  She called for a revision to the City Charter and criticized Mayor de Blasio for avoiding any action on property tax revision during his first term.

A dozen or so audience members approached Malliotakis as she departed, taking selfies, offering support and, in one case, inviting her to a local parade.  She also spoke with her Second Amendment questioner, seeming to overcome her “dismissive” initial answer despite their meaningful difference on the substance of his question.  The Club does not plan to endorse in the mayoral primary, but I left with the impression that most Club members will support Malliotakis in a more concrete way – they’ll carry petitions for Malliotakis beginning Tuesday.