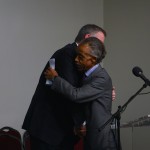 In a lengthy introduction and opening remarks, Sharpton rejected the notion that he is anti-police and the notion that de Blasio’s relationship with him is either unusual or untoward.  After describing his relationships with past mayors and governors, Sharpton said of de Blasio “we didn’t want a flunkie we wanted a mayor, and we got a mayor that will talk to us and respect us.”  Here are his full opening remarks:

Mayor de Blasio saluted Martin Luther King and praised Sharpton as continuing King’s work.  de Blasio also indirectly rebutted critics, offering praise for police while emphasizing the crime reductions in 2014 under his administration.  He criticized anyone “saying something vicious and vile to a police officer”, saying that anyone doing so is “holding us back.”