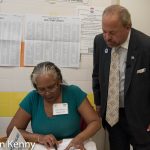 Mayoral candidate Bo Dietl cast his first campaign vote this morning, writing in his name in the Reform Party mayoral primary.  Sal Albanese is the only candidate whose name appears on the Reform Party ballot, but Dietl and rival candidate Nicole Malliotakis are each mounting write-in campaigns aimed at wresting the Reform Party line from the Party leadership’s chosen candidate.  They’re able to do so because “opportunity to ballot” petitions were filed with the Board of Elections, creating the write-in spot on the ballot and opening the party primary to registered voters who are not in any party.  (A Gotham Gazette background report is available here.)

Dietl unsuccessfully attempted to switch his party registration from Republican to Democratic in 2016, ending up as not registered in any party.  Although he filed a new registration in June, as a member of the Democratic Party, that party enrollment does not take effect until 2018 and New York election law considers him to be a “blank,” not part of any party, for the 2017 elections.  A small consolation prize from his registration and ballot troubles is the ability to vote today in the Reform Party primary.

Dietl spoke with me both before and after he voted, discussing the Reform Party race, issuing an unusual invitation to Mayor de Blasio and offering harsh words for rival candidate Nicole Malliotakis.

Dietl expressed some confidence in winning, but professed to be unconcerned about not doing so.  He’ll be on the general election ballot in November, on a self-created line, no matter what happens in the Reform Party primary.  Having a second line would be a plus for him, but the greatest benefit of a win today would be eliminating Sal Albanese from the general election campaign.  Albanese is in the Democratic primary today, but will almost certainly lose to Bill de Blasio.  He would then only appear on the November ballot if he prevails in today’s Reform Party primary.  For both Dietl and Malliotakis reducing the field of de Blasio opponents from three to two would be advantageous.  Here’s what Dietl had to say:

Let’s Go To Jail, Together:

Dietl had a very unusual invitation for Mayor de Blasio, offering to “lock myself in with him” on Rikers Island in order to better understand its problems.

Dietl had very harsh comments for rival candidate Nicole Malliotakis, referring to her as “the Republican … a non-entity” and refusing to even say her name.  Dietl had generally referred to Malliotakis politely, often as “a nice lady,” as he sought to dismiss her as a competitor.  With Malliotakis having the Republican and Conservative Party lines and the organizational support they offer,  and building off an overlapping base, she’s a large roadblock in any Dietl path to victory and Dietl’s tone has recently harshened.  Today Dietl raised two recent compliance problems for Malliotakis: her campaign’s filing of a petition falsely certifying that it contained a sufficient number of signatures and her campaign’s failure to include a spoke disclosure in a TV ad. 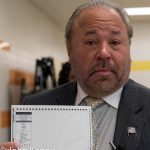 One final note: a voting photo I shot of Dietl shows his ballot as lacking a darkened oval in the “write-in” box.  Dietl’s campaign says that does not invalidate his ballot, but I haven’t confirmed that.