We caught up with mayoral candidate Bo Dietl Saturday, touching on his spat with fellow candidate Paul Massey, his ongoing court case and money.  We spoke during Council Member Eric Ulrich’s reelection kickoff fundraiser in Howard Beach.  Ulrich has endorsed Dietl and remains firmly committed to his candidacy. 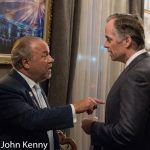 Dietl’s comments at an April candidate forum on a New York State Supreme Court justice and Mayor de Blasio’s wife provoked outrage, but Dietl was particularly incensed by a critical statement issued by Paul Massey.  At a dinner held the night after those comments Dietl confronted Massey, demanding a written apology.  I asked Dietl if he’s heard from Massey on this topic since that evening.  No was his answer, expanded with some criticism of Massey’s large campaign spending and the exhortation that longtime Larchmont resident Massey “should go back up to Westchester where he lives.”

Dietl expressed optimism on his continuing court fight to have his botched attempt at switching political parties nullified and to either be reinstated as a Republican or recognized as having switched to the Democratic Party.  Dietl said he’ll run in the general election even if he’s not successful in court, declaring that he’s a “fighter” and therefor the only candidate who can beat Mayor de Blasio.  He dismissed Assembly Member Nicole Malliotakis as “a nice lady” and Massey as “melba toast.”

Dietl has done well in fundraising, having raised $580,000 and having $346,000 on hand as of last week’s filing, but he faces an enormous cash need should he run as an independent in the general election without the benefit of a party infrastructure supporting him.  Dietl’s solution?  A planned heavy reliance on social media.