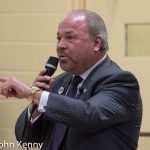 Independent mayoral candidate Bo Dietl is a no, an undecided and a not-yet-ready-to-decide on the three propositions that will appear on Tuesday’s ballot. Ballot proposition #1, whether to hold a state constitutional convention, has been widely discussed, but propositions #2, to allow for reductions or elimination of the pensions of public officers convicted of a felony related to their duties, and #3, to create a 250 acre land bank and to allow creation of bike paths and utility lines in the Adirondacks, have received far less attention. Dietl has previously declared his opposition to proposition #1.  We spoke Tuesday night at a candidate forum in Howard Beach.

Dietl’s offered two reasons for opposing a constitutional convention; the oft-discussed prospect of impairing public sector union pensions while adding the spector of “special interest groups” and “all these liberals … savoring what they could do” as his reasons for opposing a ConCon, concluding “that’s fuggedaboutit.”  On proposition #2 Dietl voiced concern “about a guy who does a crime but he has a family” and how that convicted former public officer’s family would survive financially without a lost pension.  Dubbing himself “the compromise guy” Dietl said that “this has to be weighed out.”  On proposition #3 Dietl acknowledged that he’s not familiar with the proposition or with the state constitutional restrictions on Adirondack development that inspired the proposition.  He offered that “I’d read up on it … but I’m not gonna just answer something I don’t know” adding “that’s why I’m gonna be the mayor.”