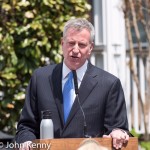 Mayor de Blasio defended his fundraising as legal and appropriate, while lamenting the current campaign finance system.  Terming the Citizens United decision as “one of the worst decisions in the history of the Supreme Court”, de Blasio urged “full public financing of elections” while criticizing the current system.  He repeatedly referenced Sugarman’s motivation in writing that memo, alluding to but not expressly mentioning Governor Cuomo and de Blasio’s seemingly endless conflicts with the governor.

de Blasio spoke at a press conference in Bay Ridge touting a water bill credit for homeowners.  The seven questions in the fairly brief “off-topic” Q&A addressed several de Blasio troubles, with a primary focus on his 2014 senate fundraising and the State Board of Elections memo.  The other questions addressed Conflict of Interest Board approval of de Blasio’s involvement in non-profit entities used to fundraise and support the mayors agenda, de Blasio’s recent proposal for an additional and conditional $20 million for the New York City Board of Elections and whether Deputy Mayor Alicia Glenn’s office was aware of the Rivington House deed debacle for a month prior to advising the mayor.  de Blasio both deferred a final answer on that last question while tossing in that “I don’t tend to think Post stories are accurate to begin with and I don’t think that one was” in response to a New York Post reporter asking about a report published by the Post.