Republican mayoral candidates Paul Massey and Michel Faulkner appeared at a candidate forum hosted by the Brooklyn Republican Committee last night.  The candidates appeared separately for just under an hour each, with time allotted for a speech, questions submitted via social media, audience questions and press questions. An audience of 60-70 people listened closely, responding positively to both candidates although more enthusiastically to Faulkner.

Sitting in the audience was New York State Conservative Party Chairman and Brooklynite Mike Long.  Long said that he does not yet personally support any mayoral candidate and that he was there to listen.  Long also said that his party is also not yet at a decision point for selecting a mayoral candidate, adding that Massey, Faulkner and John Catsimatidis have expressed interest in receiving the party’s support.

Manhattan Republican County Chairwoman Adele Malpass has spoken enthusiastically of an effort by the five Republican county chairs to unite behind a single candidate, thereby avoiding a potentially damaging and divisive primary.  Brooklyn Republican Chairman Ted Ghorra, host of last night’s forum, did not discuss that with the audience.  In a brief pre-forum conversation he noted the benefits of succeeding in such an effort but also noted that voters should have the opportunity to see and hear candidates before any such effort.

It is still early in the race, and it’s possible that additional candidates will enter.  Queens Council Member Eric Ulrich is an obvious possibility and the NY Post reports that 2013 candidate John Catsimatidis is likely to enter the race.  Should any of the multiple investigations focused on Mayor de Blasio and his aides produce criminal charges other potential candidates may appear, drawn by an improved outlook generally for a Republican nominee in this overwhelmingly Democratic city.  For now though, it’s just Massey and Faulkner crossing paths as they work at introducing themselves to Republican voters.  Reflecting the early, somewhat relaxed atmosphereMassey spoke warmly of Faulkner during his remarks, and the two hugged as Massey departed and Faulkner arrived. 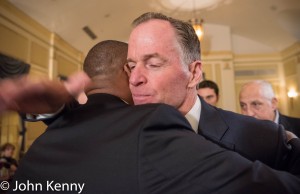 Video – complete appearance of each candidate: