Public advocate candidate Manny Alicandro held a campaign kickoff in front of Manhattan’s Trump Tower, highlighting his support of fellow Republican Donald Trump.  Alicandro has appeared at a few candidate forums, but has been less visible than most of the other candidates. 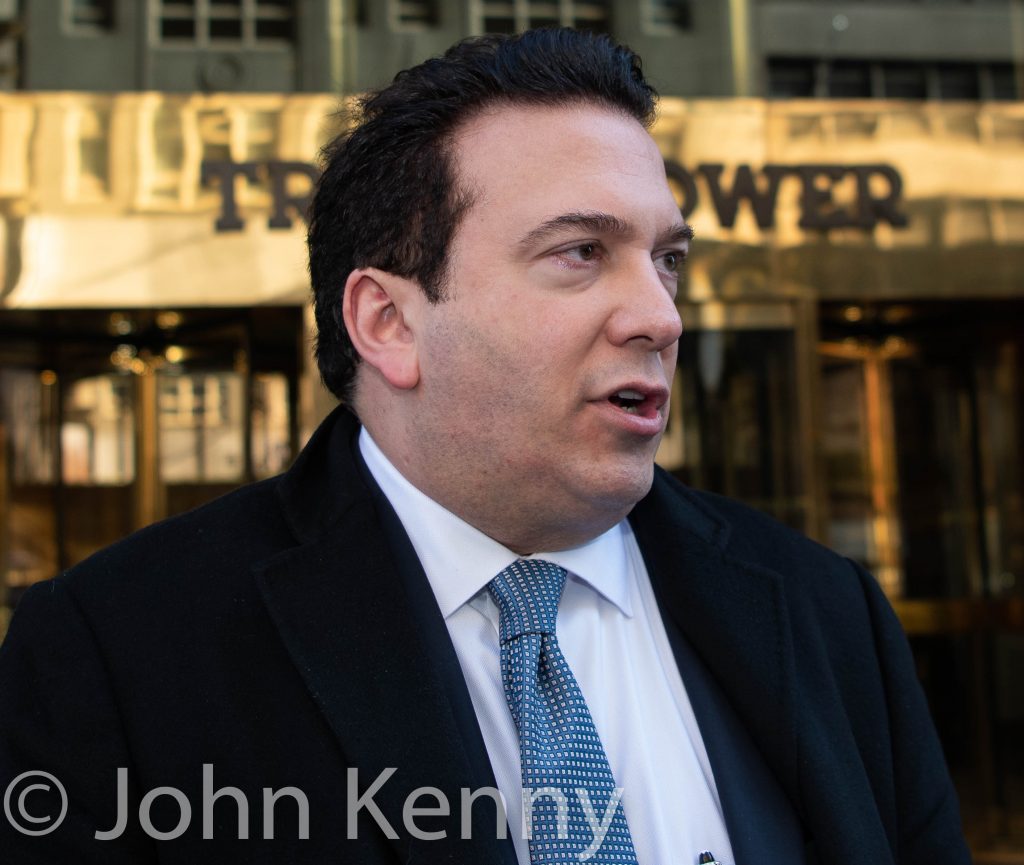 Republican Alicandro is an enthusiastic Trump supporter and said that he’s actively seeking an endorsement from Donald Trump, adding that his “prospects are very good.” He was coy, however, about whether he’s spoken directly to Trump about an endorsement.

He was harshly critical of the other Republican in the race, Council Member Eric Ulrich.  He cast Ulrich, who’s been endorsed by each of the five county Republican organizations in New York City and several of the few Republican elected officials in New York City, as having “a long standing relationship with the mayor” that negatively impacts Ulrich’s electoral prospects.

His self-described path to victory resembles Ulrich’s; in a non-partisan election with 17 candidates, almost all of them Democrats, a Republican has a realistic chance by “activating pockets of voters” and winning with a vote total that would produce a dramatic loss in a typical general election with a single Democratic opponent.   With his vocal and enthusiastic support for President Trump Alicandro threatens to canibalize those Republican pockets that Ulrich, who seeks to keep some distance from Trump, is counting on.

Alicandro is a member of the Upper East Side’s Metropolitan Republican Club.  The Club has recently had a very contentious election for Club president, electing Ian Walsh Reilly over Bob Morgan, in the wake of a 2018 appearance by Proud Boys founder Gavin McInnes at the Club.  Alicandro said he voted for Reilly, who’s been criticized both inside and outside the Club for the McInnes invitation, but added that he views the McInnes invitation as “unfortunate, inappropriate” and the full episode as “troubling.” Alicandro said he’s seeking a Met Club endorsement and expressed optimism on his prospects of receiving it.

Alicandro has never held elective office and ran one aborted campaign, seeking the Republican nomination for New York State attorney general in 2018.  He ended his effort when the state Republican party moved to to support Keith Wofford during the state party convention two weeks after Alicandro announced his candidacy.  Alicandro’s 2018 announcement came just hours before then-attorney general resigned following the revelation that he had assaulted and abused numerous women.

Alicandro was accompanied by a few campaign staffers/supporters for his kickoff.  Arriving well before the scheduled start time he spoke with two reporters at length, but did not have a set press conference or rally.