He went from prayers to produce in a Bed-Stuy flash.

Just minutes after a closing prayer at a political event Thursday night Governor Andrew Cuomo made a quick visit to a Bed-Stuy grocery store, greeting shoppers and staff and joining a grand reopening ribbon cutting.

The event wrapped up with a prayer, introduced by Cornegy saying “Governor Cuomo, we know that prayer has been taken out of the schools but it hasn’t been taken out of Bedford Stuyvesant and Crown Heights.”  As the minister leading the prayer asked that “everyone hold hands”, Cornegy chimed in “except the photographers.”  Cuomo joined the audience in clasping hands with his neighbors and bowing his head as the minister led a prayer in appreciation of Cuomo’s attending the event and praying for Cuomo’s safe travel home.

As Cornegy concluded he invited the audience, including the Governor, to join him at a grand reopening of an adjacent grocery store.  “Let’s go!” replied Cuomo.  The press, the elected officials and Cuomo and his staff then headed to Super Foodtown, about 100 yards away via an interior courtyard.

Cuomo was well-received, shaking hands, waving and saying hello to surprised shoppers and staff.  On arrival he was greeted by Foodtown Co-president Noah Katz.  (Cuomo later said that he met Katz in the aftermath of Hurricane Irene, at a store Katz has in Margaretville, NY.)  After a brief chat about the store while standing at the produce section entrance, they walked through the produce section and across the front of the cash registers, heading to a five foot long “Grand Reopening” red ribbon hanging between two stanchions.  Surprised shoppers and staff looked on, many whipping out their phones.  “Don’t forget the change” said a man picking up his grocery bag to the cashier he had just paid, as the cashier turned to watch Cuomo.

As photographers and onlookers pressed in on the group preparing to cut the ribbon Cuomo graciously guided the 5-footish Assembly Member Annette Robinson to stand front and center in view of the cameras.  “I’m fine back here” said 6’10” Robert Cornegy as the governor appeared to also offer Cornegy a spot up front. 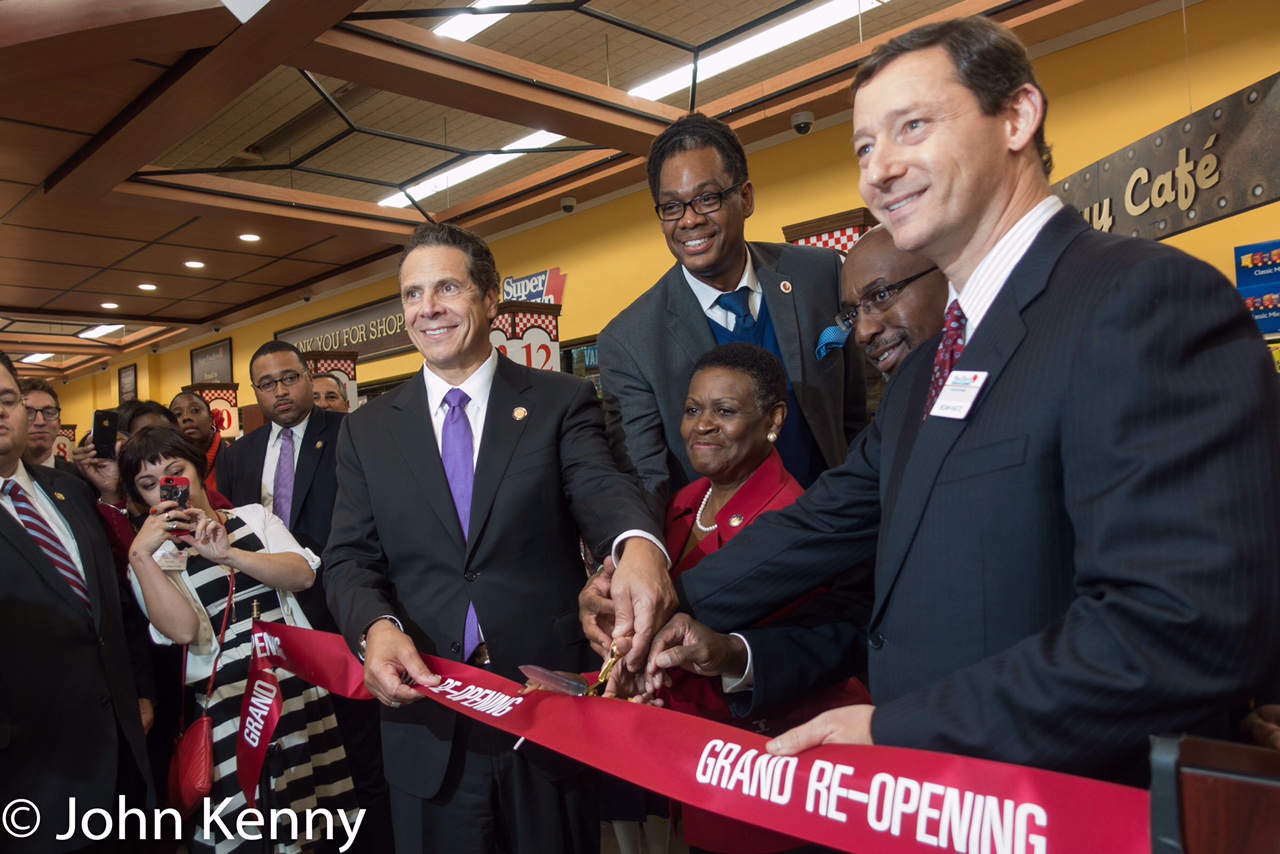 After a quick ribbon cutting Cuomo headed for the exit, now walking across the exit aisle below the cash registers.  “I loved your father” said one woman to Cuomo.  “I have a book that your mother autographed” said another as Cuomo shook her hand.  “That’s kind of you – thank you” replied the smiling governor as he headed out for a brief press Q&A and his prayed-for drive home.

Photo Gallery:  Our photo gallery of Cuomo’s visit is here.

*  Some minor editing and rewriting shortly after initial publication.