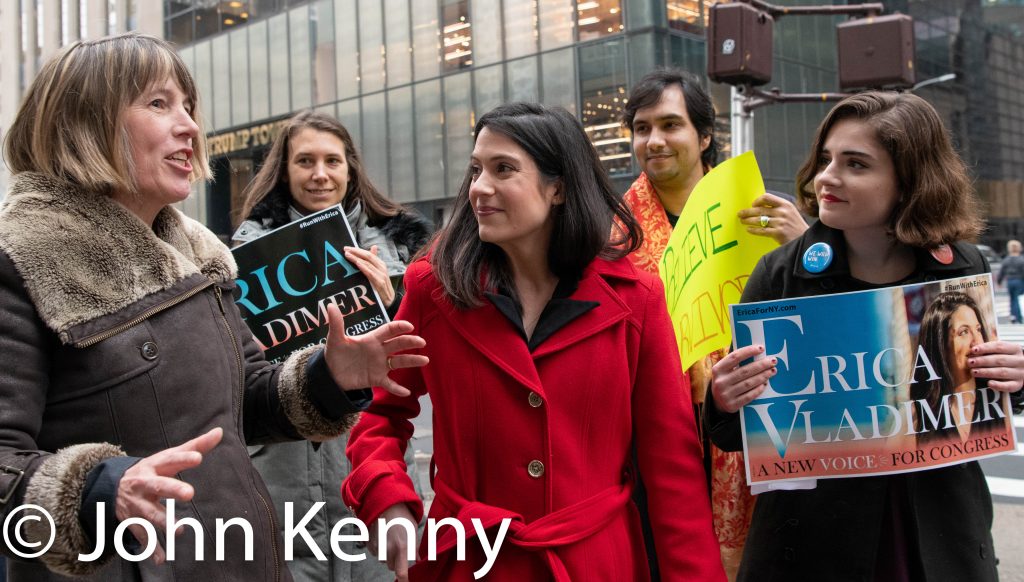 This is Vladimer’s first run for public office.  She said that she’s previously volunteered on political campaigns, including Tiffany’s Caban’s run for Queens district attorney and a NYC council race, as well as being “voluntold” on then-NYS Senator Jeff Klein’s campaigns while a state senate staffer.

An attorney, Vladimer worked for the state senate’s Independent Democratic Conference which was lead by then-NYS Sen. Jeff Klein, but resigned in 2015 following what she describes as a sexual assault by Klein.  She first publicly described the alleged assault in 2018 and in 2019 joined with five other women who have publicly described instances of sexual assault and discrimination connected to their work in New York state government to form the “Sexual Assault Working Group.”   The group has advocated for public hearings and several changes in state law.

Vladimer, who said that she’s met Maloney a few times but doesn’t really know her, spoke cordially of Maloney on a personal level, describing her as “a lovely woman.”  Her case for casting out the senior Democrat, who has just become the chair of the House Oversight Committee, appeared to predominantly rest on arguing that Maloney has underperformed in her 28 years in Congress and that in the absence of providing sufficient leadership Maloney should be replaced. 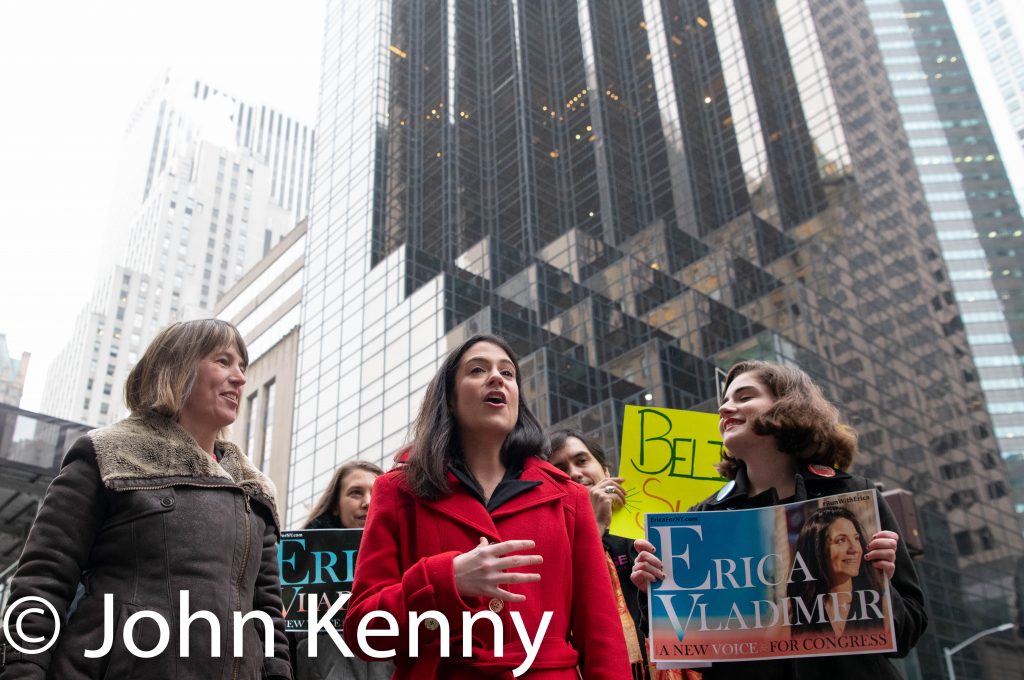 Teachout has twice run unsuccesfully for the Democratic nomination for statewide office, for governor in 2014 and attorney general in 2018.  Even with an 0-2 record she’s become a very visible leader among the waves of progressive voters and candidates seeking to move the Democratic Party and the state to the left.  Her endorsement offers Vladimer the prospect of validation among the progressive side of the party that Vladimer and the other Maloney challengers are hoping to harness.

Vladimer offered some compliments on Maloney’s recent ascent to chair of the House Oversight Committee, saying that she “appreciate[s]” Maloney advancing the legacy of her predecesso, the late Rep. Elijah Cummings, and that Maloney is “doing a good job as chair.”  Vladimer said that Maloney is nonetheless not “the type of leader we need for the district.”

The 12th Congressional District is split among the East Side of Manhattan, Astoria and Long Island City in Queens and Greenpoint and part of Williamsburg in Brooklyn.  With about 70% of the Democratic voters in Maloney’s Manhattan Vladimer faces a challenge as she seeks to harness the progressive energy that propelled Alexandria Ocasio-Cortez to victory in a neighboring Queens district and Jessica Ramos to victory in an overlapping state senate district.  That progressive energy has not been as visible in Manhattan, but it’s an important part of a Vladimer path to victory.

Vladimer and all of the other expected candidates, including Maloney, will need to successfully petition onto the June 23rd primary ballot.  Petitioning runs from February 25th until April 2nd, so the ballot will not be set until early April.  (Three additional candidates, Suraj Patel, Lauren Ashcroft and Peter Harrison, have also previously filed campaign finance reports with the Federal Election Commission.)

Vladimer, who began her campaign in June, reported having $13,900 on hand as of October 31st.  The next campaign finance report, through December 31st, is due at the end of this month.  Vladimer declined to give any information on her recent fundraising, saying instead only that “we’re building a grassroots movement, we’re relying on people power.”  Maloney reported $500,000 on hand as of October 31st.

Vladimer said that she has not yet decided on which presidential candidate she’ll support, but spoke highly of Senators Bernie Sanders and Elizabeth Warren as “really embodying the values that we’re looking for.”  Vladimer added, however, that she’s disappointed in all of the presidential candidates for not adequately “centering gender-based violence.” 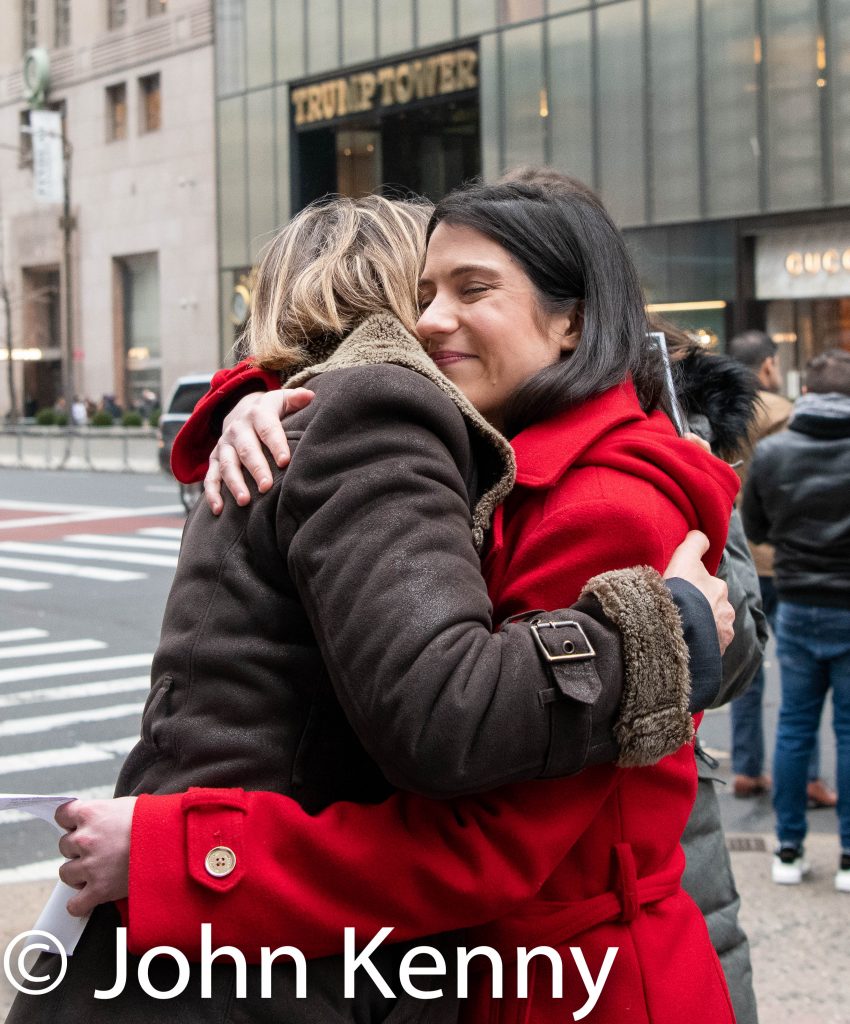