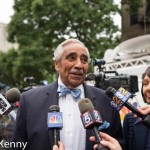 “I couldn’t find my name.  But I’m so glad I did find his name” said Congressman Charles Rangel after voting in his first congressional election in more than 45 years in which he was not a candidate.  The “his” was Assembly Member Keith Wright, a longtime Rangel ally whom Rangel has endorsed as 13th Congressional District Democrats select a nominee to replace Rangel. 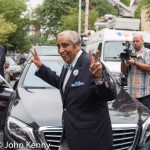 Rangel arrived at Harlem’s P.S. 175 to vote accompanied by his wife Alma and Wright.  Appearing a few minutes ahead of schedule, Rangel spoke with the press both before and after voting, expressing support for Wright, but clearly not in a rush to leave office or the spotlight.  Rangel loves the camera and it loves him right back, as shown in the two press Q&A’s Rangel did this morning, one as he arrived and a second after voting.

Many of the questions focused on Rangel’s emotions as a successor is selected and on his post-Congress plans, but he and Wright also addressed allegations that supporters of rival Adriano Espaillat have sought to suppress voting by African American voters in the District.