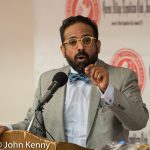 J.C. Polanco, expected to be a candidate for public advocate, made a very impressive appearance at the Queens Village Republican Club Thursday night.  Polanco has been visiting many Republican political organizations throughout the City over the past couple of months, preparing to launch a bid for public advocate.  As recently as Thursday he said that he expects to formally launch his campaign this week.

Polanco has long been involved in Republican politics, having served on the City Board of Elections, as a state committeeman and a District Leader and run for the NYS Senate against Jeff Klein.  He also ran for the Assembly, but that may have been as a Democrat while in college.

Polanco is a gifted speaker who coherently laid out his thoughts on issues including the role of the public advocate, the Oscar Lopez Rivera controversy, abortion, gun rights, Mayor de Blasio and his “agents of the city”, crime and his expected race.  Beginning with recognition of several Club members who he’s worked with in the past and praise for the Club’s Lincoln Day Dinner he immediately had an easy rapport with his audience.  After some personal history, drawing groans when he mentioned that he was a Democrat as a young man, he offered kind personal words for incumbent Public Advocate Tish James, saying that he’ll have plenty of criticism on her positions and actions but not engaging in personal attacks.  In the Q&A he went out of his way to express appreciation for his audience members who will shortly be carrying petitions for him.  (The Club will have Polanco on its petitions.)  His presentation is worth watching.

One thought on “Polanco At QVRC”