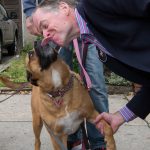 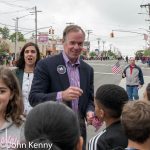 Republican rivals Paul Massey and Nicole Malliotakis each worked the crowd energetically, marching near one another while doing their best to ignore the other’s presence.  Malliotakis, a member of the New York State Assembly, marched behind her own banner and following the Queens Village Republican Club while Massey walked without a banner, instead dependent on a staffer bellowing “meet Paul Massey, the next mayor of New York City” for identification.  Malliotakis and Massey mostly worked opposite sides of the street, with each receiving steady positive responses.  Those responses mostly did not appear to be driven by familiarity, but instead driven by being a Republican opposing Mayor de Blasio.

Mayor de Blasio also received a mostly positive reception.  In walking about 1/3 of the route with him I saw about 6-8 instances of heckling or jeering among a steady stream of cheers, handshakes and photos.  de Blasio entered the parade immediately upon arrival and did not take any press questions.