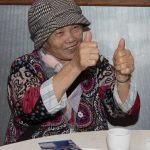 Malliotakis was well-received on her visit, with diners at Joy Luck Palace visibly excited as she worked the room.  It appeared that for many of those diners it was the prospect that the next mayor was with them, rather than any particular support for Malliotakis, that excited them.