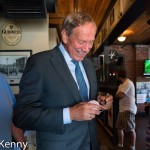 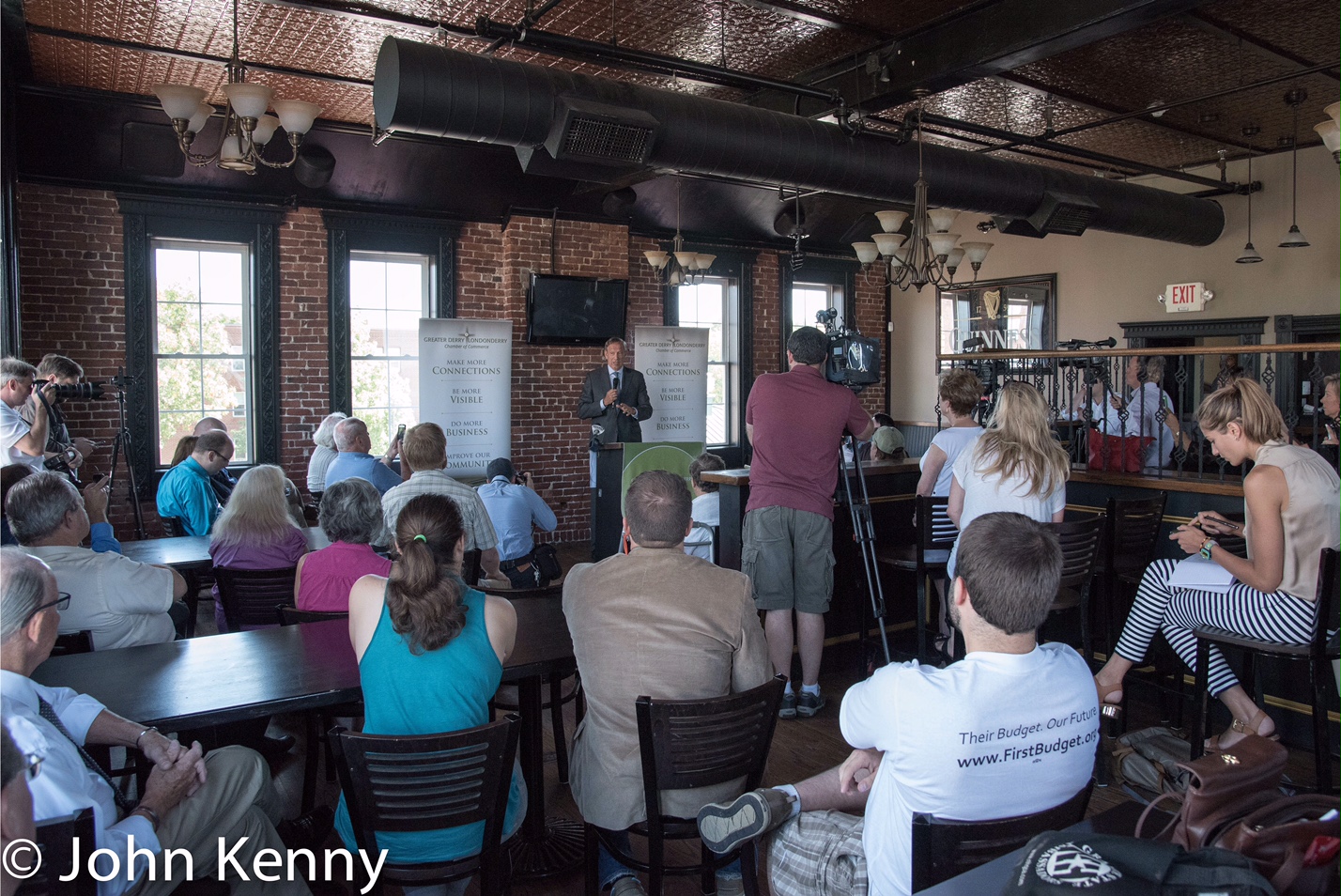 In Derry Pataki spoke to an audience of about 25-30 people.  After 10 minutes of opening comments he fielded questions for about 35 minutes.  Several questions covered campaign finance and Citizens United, with questioners clearly skeptical of the unlimited money allowed under the Supreme Court’s recent decision.  Pataki criticized the current split system of limits on campaigns but unlimited money raising for super PACs.  Calling it a “horrible system … abused … by both sides”, Pataki argued that a better system would be to allow larger contributions for campaigns, with immediate disclosure, so that the candidate/campaign are “responsible” for all of the ads and other activity on behalf of that candidate.

Other questions included what the arts mean to Pataki (he made an awkward reference to poor performance in his 7th grade art class) and whether as president he would “have any input on who becomes senate president” from an audience member expressing disappointment in Speaker John Boehner and Senate Majority Leader Mitch McConnell.  He disclaimed any intention to influence the selection of legislative leaders, saying it’s a counterproductive effort for an executive, but pivoted to saying that he would work with Democrats even though “that’s not what people want to hear.”

Pataki drew applause only once during his comments, when he launched into an unprompted attack on Donald Trump.

An anti-Washington theme was persistent in his comments, for example calling for a ban on former members of Congress working as federal lobbyists and criticizing the lack of a federal infrastructure program and highway program.  Pataki also expressed support for fast-track authority on the Trans Pacific Partnership and, depending on the as-yet undetermined specifics, possibly for a TPP agreement.

At a farmers market in Manchester Pataki chatted with 15-20 customers and vendors over 30 minutes.  Declaring that he’s “the only farmer in the race”, Pataki touted his childhood on a family farm in Peekskill and his current farming in the Adirondacks.  He spoke easily with vendors about their farms and products.  Many of the people Pataki spoke with at the market mentioned a New York connection, whether growing up, attending school or being stationed there while in the military.  They appeared interested in Pataki, with some expressing support, but it was a light crowd with limited press coverage.

Talking with a vendor selling beef (the “competition”), Pataki described his farm’s beef as “grass fed and grass finished.”  After looking at that vendor’s price board, Pataki smiled and said “they’re not charging enough.”  A kettle corn vendor revealed his Buffalo roots and love of the Bills, prompting Jets fan Pataki to proclaim his second-choice fandom for the Bills.  When I asked afterwards about Pataki’s support for Patriots QB Tom Brady, Pataki doubled down on his prior comments, describing Brady’s suspension as “ridiculous.” 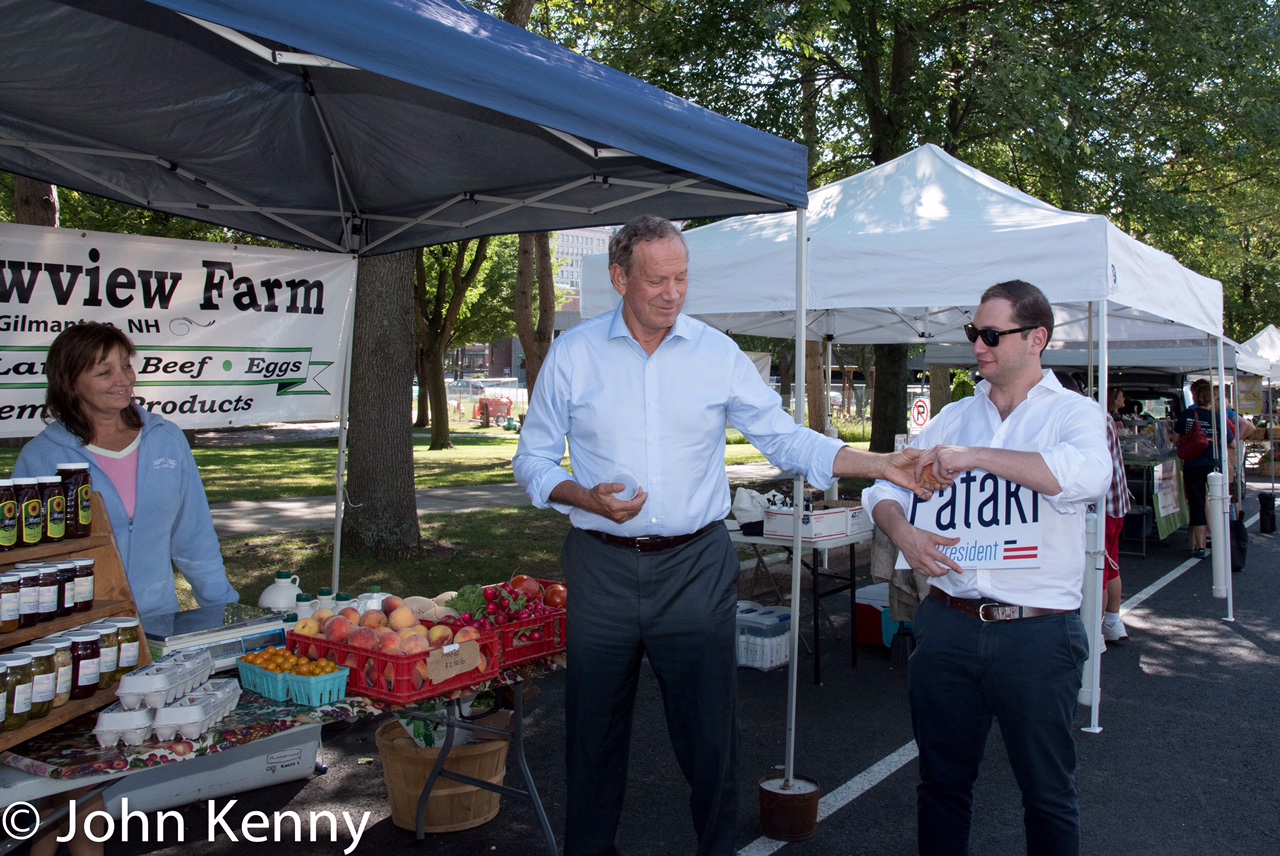 The visit neatly captured Pataki’s campaign; he gets a tiny bit of interest and attention as he reveals some non-orthodox views but the main focus and interest is on other candidates.  He remains deep in the bottom of polls while other candidates (Carly Fiorina briefly, and now John Kasich) have captured attention and begun an upward spiral.  Pataki’s prospects are dim, with little money to support his campaign and already slim chances for attention drowned out by the Trump media monopoly.  As of June 30th Pataki’s campaign was virtually broke, reporting $200,000 on hand.  The super PAC supporting him was in even worse financial shape, reporting $67,000 on hand. Continuing for long as a candidate is unlikely absent a dramatic change in fundraising.

Pataki may have already eased into a post-candidate role, however.  Thoughout his campaign he’s appeared many times on cable networks.  As Donald Trump has risen, Pataki’s appearances have featured critiques of his fellow New Yorker, especially on Trump’s statements on immigration.  Pataki has found more of a national voice appearing on these shows than in his campaign appearances, and such a role may eclipse his back-of-the-pack campaign.