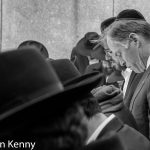 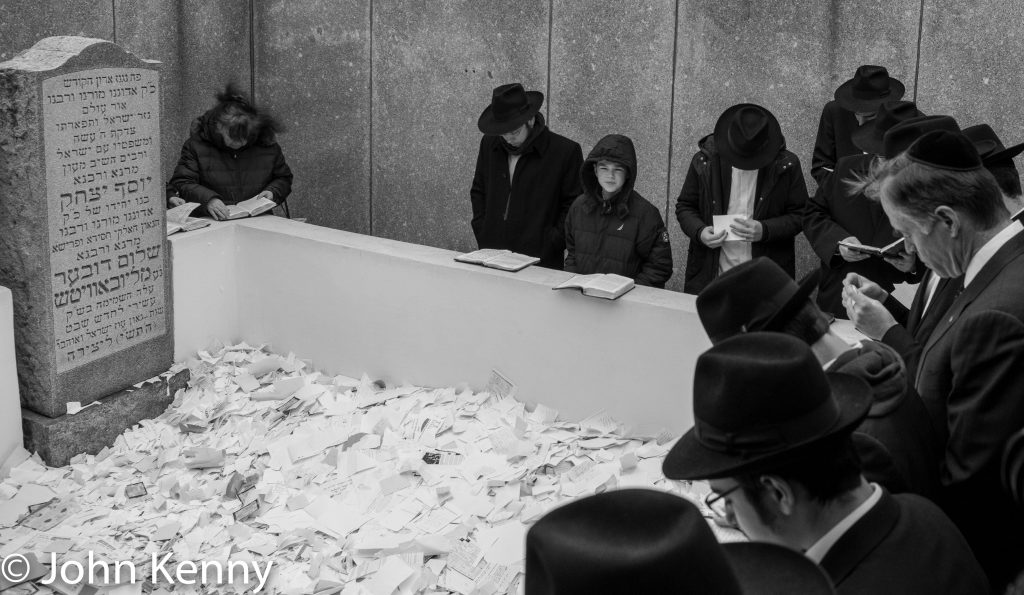 The visitors center adjacent to the Ohel was bustling, with a few hundred people spread among its several large rooms, present to mark the Rebbe’s birthday.  Mothers and young children sat in the front room of the house as video of the Rebbe played on a large TV screen, while groups of slightly older children meandered about, some curious about the visitors.  The center appears to have been built as a small residential house, like the many  homes nearby in the neighborhood, with some additions and a large semi-permanent tent added between the rear of the house and the cemetery.  His hosts led Massey on a brief walk-about, going though the women’s sitting area and into the multiple men’s rooms in which men were in various stages of praying, talking and arriving or departing.  (Although the rooms are clearly separate for men and women our gracious hosts did not object to or in any way seek to prevent the women reporters/staff from entering the men’s areas.)

A steady stream of people flowed between the visitors center and the Ohel, set about 50 yards into the adjacent cemetery.  The Ohel, a small square with about 2/3 of its center area taken by the two graves and a low wall, was quite full on the men’s side and moderately full on the women’s side.  Massey squeezed in, standing silently for a few minutes and dropping a note onto the pile of thousands of notes and letters left by other visitors seeking the Rebbe’s blessing or guidance.

Massey held a brief press Q&A following his visit, speaking with reporters for just over 5 minutes.  He’s improving as a candidate, displaying more knowledge on City topics than in earlier press conferences.  He’s far from fluid on many topics however, seemingly working his talking points in his head as he responds on some significant topics.

Questions began with a sharply posed question on metzitzah b’peh, a circumcision ritual practiced by some ultra-orthodox groups in which a mohel, an adult male, draws blood from an infant’s circumcision wound with his mouth.  A small number of infants have contracted herpes through such contact with herpes-infected mohels, provoking public health officials to seek to limit or ban the practice and providing a difficult political issue for Mayors Bloomberg and de Blasio.  Massey had clearly studied the issue, referring to it as “MBP” and offering Rockland County’s approach as a model  for the City.  He didn’t appear all that fluent in the Rockland County effort, however, beyond the notion of communication between the government and the interested community.

Massey similarly displayed some increased comfort discussing stop and frisk, but was non-committal on whether it was excessively used through 2013 and how he would avoid any element of racial profiling in continued use of the practice.  He unambiguously supported the “Raise the Age” initiative and supported a rebuilding of the Rikers Island jail complex, but expressed disagreement with closing Rikers and moving all Rikers jail operations to new or expanded jails elsewhere in the City.

When I asked about recent efforts by Republican leaders to grant a Wilson-Pakula to Bo Dietl, which would allow Dietl to run in the Republican primary against Massey, Massey sought to brush off any concerns.  Saying that he’s focused solely on Mayor de Blasio, Massey did not acknowledge any concern over Republican leaders possibly seeking an additional candidate after finding Massey wanting.

The press conference ended after about six minutes, as Massey and his press secretary cutoff questions and departed.

Our full photo gallery of Massey’s visit is here.