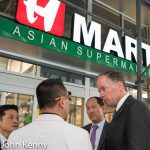 Republican mayoral candidate Paul Massey supports mayoral control of the City school system, but doesn’t have any preference between the one house bills currently floating on the opaque sea of Albany.  The state Senate has approved a bill giving a five year extension of mayoral control, but additionally providing for increases in then number of charter schools.  The Assembly has approved a two year extension, without the Senate charter school provisions.  Should the legislature not agree on an extension before concluding the legislative session next week New York City would revert from mayoral control to the discarded board of education model.

Massey passed on supporting either of the competing bills, saying that he’ll leave it to the legislature to resolve.  That’s somewhat surprising since the Senate version seems well suited to his aspiring to be mayor and his support of charter schools.  His response included a lengthy statement supporting charter schools, but as noted above, it didn’t move him to supporting the Senate version of mayoral control.  Massey also said that he has not been in contact with Senate Temporary President John Flanagan, or any other legislators, on the topic of extending mayoral control.

We spoke this afternoon at the conclusion of Massey’s walking tour of Koreatown businesses.