Massey clearly has a plausible chance to win the Republican nomination.  He’s raised significant money and put in a large amount of his own, with an unspecific pledge to put in more, he’s a good speaker, comes across as a good guy and offers a believable claim of being a solid manager.  By his own description he’s thoroughly familiar with all five boroughs as his real estate brokerage business had him engaged in neighborhoods throughout the City.  Additionally there’s a limited Republican field so far with only one other declared candidate, former NY Jet Michel Faulkner.  (New York City Council Member Eric Ulrich has been exploring a run but seems increasingly unlikely to run, while 2013 candidate John Catsimatidis appears fairly likely to run.)

Massey has some significant challenges, however.  He’s muffed questions on fundamental issues such as stop and frisk, appearing uninformed and unfocused on an issue central to New York City politics over the past five years.  More problematic for Republican voters are the issues that he does have a position on: he supports gun control, he has distanced himself from President Trump’s harsh positions on deporting illegal immigrants and said that he’s pro-choice.  Those are all pluses in a New York City general election but decided negatives in a Republican primary. He also tries to avoid talking about Trump, who appears very popular with Massey’s audiences.

At the Queens Village Republican Club Thursday night Massey’s practiced attacks on Mayor de Blasio were well-received.  The audience, like virtually every Republican audience, appeared to despise the mayor, warming up just ahead of Massey’s speech with a shout of “dump the dope from Park Slope” and chants of “de Blasio’s gotta go.”  Those attacks don’t distinguish Massey, however, and his own “maxout” contribution of $4,950 to de Blasio in October 2013 goes unmentioned.

Massey’s challenges were apparent in the questions posed.  The first query was from a woman who described herself as the president of a  pregnancy crisis center and asked about state and city funding.  Massey, who told me the night before that he is “pro-choice” responded by noting his “long time” involvement with a foster care agency and then discussed the City budget and finding “fat” to redirect.  A second question paired a very broad policy question, whether Massey has settled on a solution for addressing homelessness, and a very specific detailed query on potholes premised on failures at the supervisor level of DOT.  On homelessness Massey praised a Bloomberg-era focus on quantitative/statistical measuring of non-profits performance, pledging a return.  He then spoke of an issue dear to de Blasio, the challenge of addressing mental illness and the resulting impact on homelessness.  He displayed a bit of political dexterity, repeating his proclamation that he will personally fill potholes and drive a snowplow if streets are not adequately repaired of plowed.  Recounting that a DOT rep tweeted that Massey’s snowplow claim is meaningless as snowplow driving requires a special license, Massey declared to applause that his “team” submitted such an application the night before.

Question three was where he really lost his audience.  A man rose to ask about Massey’s view on guns and the Second Amendment and on New York City as a “sanctuary city.”  0 for 2 would be a generous description of how Massey’s answers were received, with one attendee later describing it as “the moment the wind went out of his sails.”  After fumbling around for a bit Massey said that he “would probably be for controlling guns … probably the way Mayor Bloomberg felt.”  In some ways this was his low point; offering an answer anathema to his audience and party without evincing any serious thought or effort at preparing a cogent plan for the essential city issue of guns and gun violence.

On the second part of this question, and consistent with his prior appearances, Massey offered support for deporting violent felons.  He’s previously voiced support for immigration enforcement based on national security  concerns.  His statement that “we’re a city of immigrants … we should respect the rights and dignity of everybody that’s here” was met with a direct question of “do you support President Trump’s policies on illegal immigration?” Replying that “the current policy in the City is fine, the current [presumably police] commissioner is pursuing a policy that I think is fine” produced silence and a couple of head shakes.  From my limited observation in the past month New York as a “sanctuary city” energizes Republican audiences more than any other topic and Massey is not in sync with the Republican audience predominant view.

The final question of what Massey would do if Hillary Clinton runs for mayor (with a woman murmuring “heaven help us”) produced an Massey anecdote describing how his wife supported Clinton and would be torn about who to vote for in a Massey/Clinton general election.  That anecdote might help soften a general election audience of Democrats and independents but it left this Republican audience bewildered.

Update – Video of the audience Q&A:

Massey may get better footing as the race proceeds.  It’s still quite early in the race (although the Yogi Berra truism that it gets late early out here could well apply) and he could markedly improve.  His fumbling answers to policy questions aren’t widely noticed by voters yet, but the developing press and insider sense that he’s underprepared is damaging.  Word is that Massey has been diligently courting county leaders, and gaining their support will be helpful.  Putting a large amount of money into his campaign now might also help in overwhelming Faulkner and Ulrich (it won’t affect Catsimatidis) and spending it on TV ads now could move him markedly ahead in public awareness and name recognition.

There’s lots more to come – stay with us as the race develops. 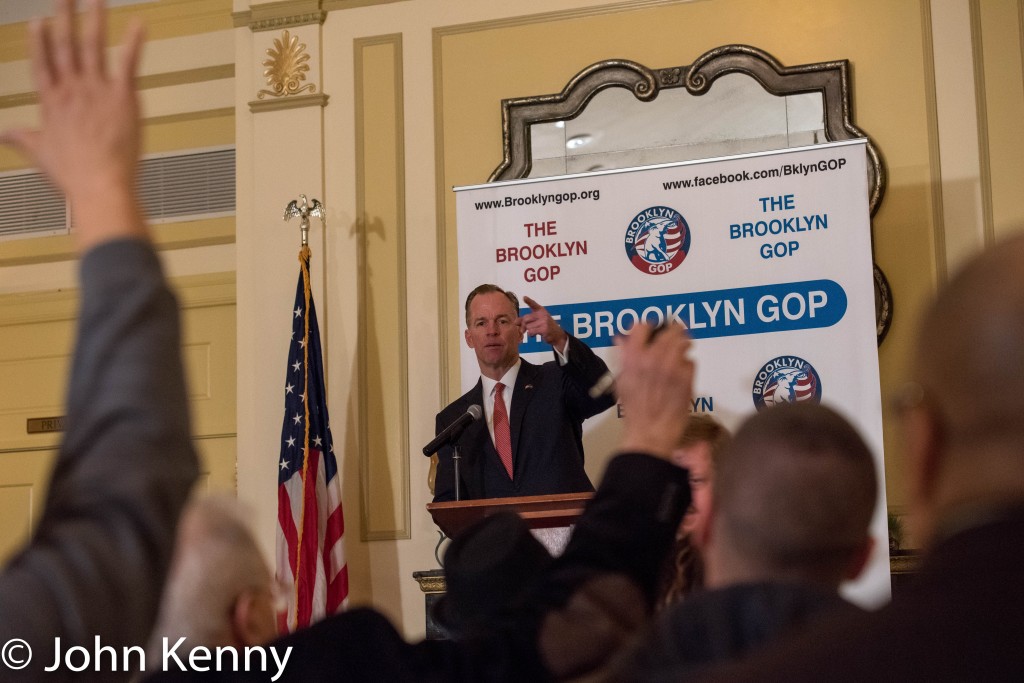 N.B.  For background, visit our prior coverage of Massey, including:

His appearance at a Brooklyn GOP candidate forum.