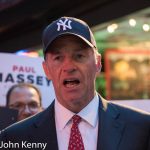 Massachusetts native and New York City Republican mayoral candidate Paul Massey claimed to have long ago left Red Sox Nation as he donned a Yankee hat in the shadow of Yankee Stadium.  Massey, receiving the endorsement of the Bronx Republican Party, spoke at a press conference outside Stan’s Sports Bar near Yankee Stadium.

Bronx Republican Chairman Mike Rendino, owner of Stan’s, paired his presentation of the hat to Massey with criticism of Mayor de Blasio for his recent refusal to put on a Yankee hat.  de Blasio, also a Massachusetts native, is an avowed Red Sox fan who has maintained a  stony silence on the Yankees during his three and a half years as the mayor of Yankee Town.

Massey’s response to my question about his fandom suggested that he wasn’t a die-hard Sox fan, describing his father and brother as such without including himself in that category.  He went on, calling it “kinda weird” that a person who, like Mayor de Blasio and Massey himself, moved to New York City 30 or 35 years has not taken to rooting for New York teams.  Seeking to test his professed lack of emotional attachment to the Red Sox I asked Massey about the 1986 night the ball rolled through Bill Buckner’s legs, a moment that would likely be a painful memory for any true Red Sox fan.   Massey didn’t answer, walking over to silently shake hands goodbye as his face went from stone to smile.