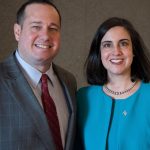 In her remarks she was quite critical of Mayor de Blasio, especially on addressing the problems of Rikers Island, what she describes as failures in crime prevention and especially sex crime prevention, and City spending.  She differs from rival Paul Massey in a meaningful way, not attacking the mayor personally as “corrupt” as Massey relentlessly does, but instead attacking his policies and outcomes.  She casts herself as experienced in government, citing her three + terms in the Assembly, and as electorally successful, winning four elections including her first against a Democratic incumbent and her most recent in which she was unopposed.  Malliotakis described herself as  “different” from what the Republican Party has offered in the past, as a woman and Latina.  (Her father is from Greece, her mother is from Cuba.)  She also cast herself as a sister in the outer borough nation, seeking solidarity with her outer borough Bronx brothers and sisters.

Questions roughly split between government issues, such as Rikers Island, homelessness and Common Core, and campaign issues, such as how to reach union members, whether she’ll open a Bronx office, why she entered the race fairly late and whether she’s hired a campaign manager.  The mostly listened, applauding only when she noted that she supports ending the use of Common Core and a post-script additional note that she’s a Yankees fan.  A riff on restoring the teaching of cursive writing in City schools coincided with her wrap-up, with some applause as well.