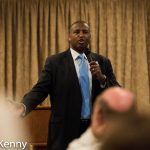 Manhattan Republican leader Adele Malpass confirmed that she and the other Republican county leaders support Faulkner’s move.  Malpass has frequently expressed her preference for avoiding Republican primaries in the three City-wide races.  She and Faulkner both expect that Faulkner will not have a primary in the comptroller’s race.  On the mayor’s race, Malpass and the Manhattan Republican Party executive committee plan to meet on May 15th to consider backing a mayoral candidate, now selecting between Paul Massey and Nicole Malliotakis.

“New York City needs new financial leadership to end the unsustainable tax-and-spend policies that are making the city unaffordable for many of our citizens and putting the Big Apple at risk of financial distress,” said Faulkner.

“I have spent the last two and a half years meeting voters and critiquing the de Blasio administration,” added Faulkner. “I now intend to run a vigorous general election campaign for Comptroller against Scott Stringer.”