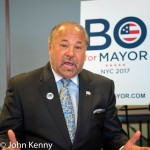 It was vintage Dietl, energetically rasping through a series of topics as he displayed what his supporters find appealing.  He’s personable and engaging, camera-ready with “streetwise” practically pinned to his lapel.  He has some knowledge of government, although it seems more about the people in government, but it doesn’t come across as particularly deep.  Like Republican candidates Paul Massey and Michel Faulkner, he seems most significantly driven by antipathy for Bill de Blasio.  He has a very different personality though, especially as compared to the Bloombergesque Massey, with his raspy stream of malapropisms and mangled mispronunciations holding his audience.

Dietl began with a call for Congressional Republicans and President Trump to delay their healthcare bill, saying that the current bill will harm the middle class and seniors and that Congress and the president can do better.  Prefacing it with “people are gonna say, ‘Bo what are you, communist?'” Dietl then went significantly further, declaring that “we should consider [a] single payer universal plan … where the government issues the healthcare.”  It wasn’t entirely clear whether he prefers a single payer or universal healthcare system, but in either case it’s a dramatic step that no elected Republicans and a limited number of elected Democrats currently support.

Dietl spoke supportively of Rep. Dan Donovan, New York City’s sole Republican member of the House and a declared no vote on the Republican healthcare bill, and Governor Andrew Cuomo, who has very visibly opposed the recent Medicaid provision added to the bill by New York Republican Reps Chris Collins and John Faso.  He has not spoken with any members of Congress on the current healthcare bill, however.

Asked about abortion, Dietl seemed to support abortion being legal without expressly saying so.

Dietl shifted topics, moving onto his favorite focus – Mayor de Blasio.  He read aloud a letter he wrote to Governor Cuomo demanding that Cuomo “fully investigate the allegations uncovered by [Board of Elections Enforcement Counsel Risa] Sugarman and reported by the national media concerning Mr. deBlasio’s (sic) open and nefarious Election Law violations.”  The U.S. Attorney’s office and the Manhattan District Attorney recent announcements that they’ve decided not to file criminal charges in their respective investigations of de Blasio’s fundraising has not dimmed Dietl’s ardor for focusing on what he sees as unambiguous de Blasio wrongdoing.  If anything, it may have fueled that ardor.  Among his brickbats  – “I was at City Hall the other day, I think I saw people in the back with bags of money.  Pay to Play New York!” 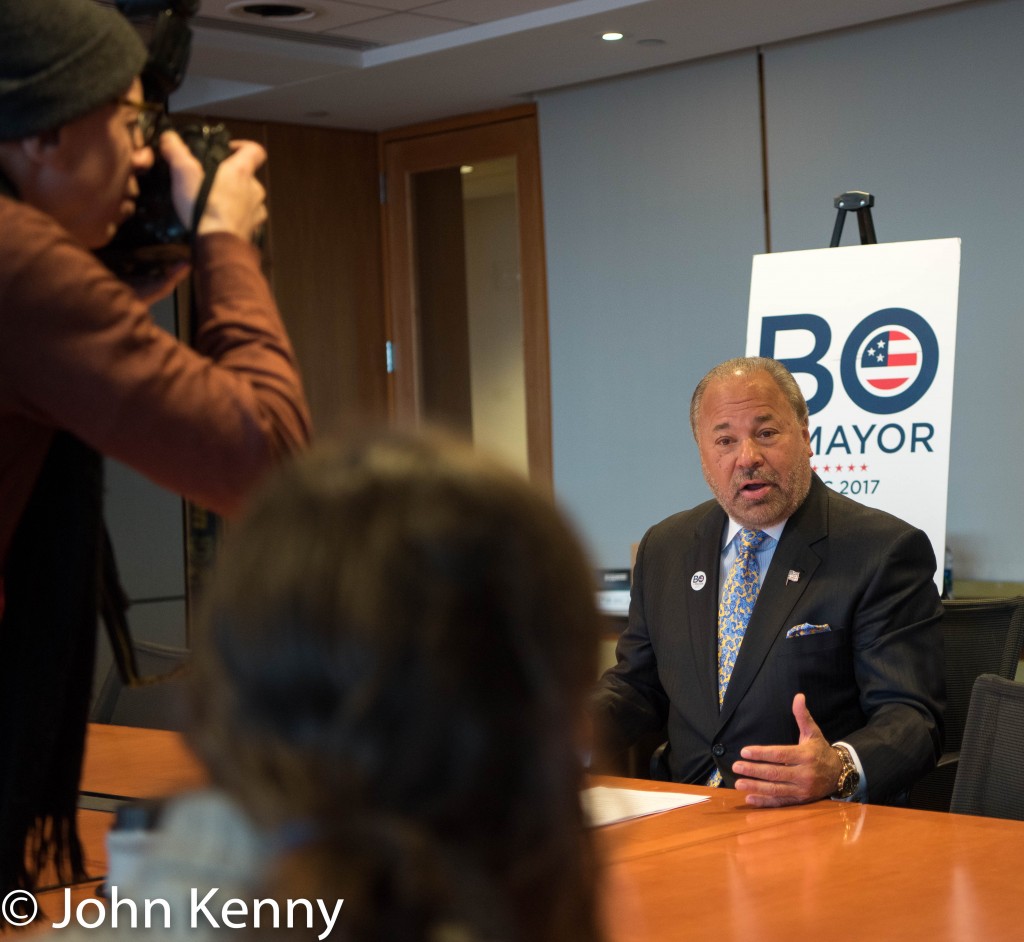 Dietl offered plenty of de Blasio criticism, several times calling him “lazy,” saying that people tell him that de Blasio does not want to actually be mayor, encouraging him to “run for … chancellor of Nicaragua” and offering “two tickets, to Havana, or Nicarauga” for the mayor and his wife.

Dietl said that he’s now open to running on the Republican line if offered a “Wilson-Pakula”, a required waiver for a non-party member.  (A detailed look at this is available here.)

Dietl was largely supportive of Donald Trump, notwithstanding his criticism of Trump’s healthcare effort.  He seems impressed by Trump as a force to reduce the cost and size of government and supports increased vetting of all non-citizens entering the U.S.  He voted for Trump in the general election, but did not vote in the Republican presidential primary, and said that he hopes Trump will work for all Americans, not just those who supported him.

Asked about a $4,950 contribution by the PBA to Democratic candidate Tony Avella, Dietl expressed optimism at receiving uniformed union support.  He threw a jab at union leaders though, describing them as “driven around in chauffeured  limousines.”

He seemed to acknowledge that he hasn’t always lived in New York City.    Unlike Paul Massey, it doesn’t seem like it will be much a political issue for the New York born-and-raised former NYPD detective.