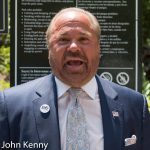 Mayoral candidate Bo Dietl’s effort at running in the Republican mayoral primary appears to be continuing, notwithstanding an adverse ruling last week by the New York Supreme Court’s Appellate Division.  Dietl said that his lawsuit continues, now in the Court of Appeals, and suggested that he may yet receive a Wilson-Pakula from the Republican Party.  We spoke during a press conference Thursday outside Gracie Mansion in which Dietl criticized the City’s switch to treating public urination as primarily a civil, rather than a criminal, offense.

Under New York election law candidates may seek to run on the line of a party that they’re not registered in only with the permission of the party, granted via a “Wilson-Pakula” waiver. Dietl, who initially wanted to challenge Mayor de Blasio in the Democratic primary, ended up as a man without a party after the Board of Elections rejected the form he submitted seeking to change his registration from Republican to Democratic as improperly completed.   Dietl filed a lawsuit seeking to force the Board of Elections to reinstate him in the Republican Party, but he has lost in Supreme Court and on appeal in the Appellate Division.  Republican county leaders rejected Dietl’s request for a Wilson-Pakula in May.   He’s also said that he plans to run on a self-created ballot line.

In a conversation Wednesday evening Council Member Eric Ulrich, Dietl’s lone elected official endorser, urged Dietl to again seek a Wilson-Pakula from Republican leaders, adding that his endorsement would not continue if Dietl runs only as an independent.  Dietl’s response was that he has not yet made any renewed outreach to Republican leaders but said that “there’s a lot of outreach to me, they’re not very happy with this other guy that went to France” (meaning Paul Massey).  He declined to say who has made such “outreach,” but added that “there’s a lot of stuff going on behind the scenes.”  It’s unclear whether there is any real prospect of a Wilson-Pakula for Dietl.  Update:   In a phone conversation late today Manhattan Republican Chairwoman Adele Malpass described the suggestion that there is county leader interest in giving Dietl a Wilson-Pakula as “a desperate man’s desperate attempt at getting on the ballot.  It’s fiction.”

On funding his campaign Dietl said that “we should be raising no less than $10 million” for a full campaign through November.  He declined to say how much money he’s prepared to personally put into the race, telling Matt Chayes of Newsday only that “I got a couple of potatoes … when the time comes and I need ’em I’ll use ’em.”

Here are excerpts from our exchange, with a question from Matt Chayes of Newsday at the end: