Zymere Perkins, Warren Wilhelm, Big Bird, Sal Albanese and Joseph Ponte.  Those names are not at the forefront of New York City’s political awareness, but all figure into Bo Dietl’s preparations for tonight’s mayoral candidate debate.  Dietl, distantly trailing Mayor de Blasio and his two fellow de Blasio challengers in recent public polls and experiencing a significant drop off from early fundraising success, is looking to the mayoral debate to recharge his campaign.  In several discussions over the past week Dietl has outlined his debate plan, mentioning topics he regularly brings up while campaigning and, mostly, promising an aggressive approach.

First some background on the names.  Zymere Perkins was a six year old boy beaten to death in 2016 by his mother and her boyfriend.  The City’s Administration for Children’s Services (ACS) had significant warning signs and contact with the family, but failed to act.  Dietl regularly mentions Perkins on the campaign trail, often pulsing with anger as he attacks de Blasio and his appointed head of ACS for negligently allowing the tragedy to occur.  Dietl frequently cites Perkins, along his own son being robbed, as motivating him to run for mayor.

Warren Wilhelm, Jr. is Bill de Blasio’s birth name, with de Blasio having changed his name  in 2002, a coda to the tragic life of his father.  His father killed himself when de Blasio was 18, long troubled after being grievously wounded in World War II.  Dietl regularly attacks de Blasio as “hiding something” with his name change and, with the recent Christopher Columbus contretemps, as being ashamed of his German heritage.  Dietl and de Blasio are each of German/Italian descent, with a German-American father and Italian-American mother.

“Big Bird” is Dietl’s uncomplimentary moniker for the 6’6″ de Blasio, using it regularly.  It’s among his more childish insults, but draws a response from many friendly audiences.  In comments Saturday (video below) Dietl declared that in deference to his young grandson he may discontinue the reference, but that he’ll instead tell de Blasio  he’s a “creep.” 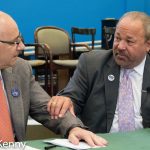 Sal Albanese is also a mayoral candidate, running on the Reform Party line after losing the Democratic primary to de Blasio.  During the Democratic primary Albanese twice debated de Blasio in televised encounters.  Dietl and Albanese appear genuinely fond of each other, but Dietl regularly cites Albanese’s debate performance as reinforcing his resolve to aggressively and personally attack de Blasio.  Having once told Albanese that “boy, he bitch-slapped you the other night” Dietl pledges to avoid the “cat and mouse” routine he saw in the de Blasio/Albanese performances.  Unfortunately for Dietl Albanese polled higher than Dietl in public polls released last week.  Albanese is not in tonight’s debate, however.

Dietl frequently references Joseph Ponte, the former Commissioner of the Department of Correction who resigned this spring.  Although never mentioned by name Ponte is a two-fer for Dietl; criticizing de Blasio for hiring a commissioner without, in Dietl’s view, sufficient experience and who spent significant time in Maine and attacking the mayor’s plan to close Rikers Island. 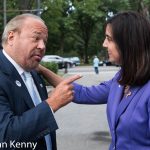 As for the Republican and Conservative Party’s mayoral candidate, Dietl tries to avoid mentioning Nicole Malliotakis and instead casts the race as only between himself and de Blasio.  Often describing her as a “nice lady from Staten Island,” Dietl dismisses her as unprepared and as too conservative to win election citywide.  By Dietl’s account he’s ignored her role in his debate preparations.  She’s also badly lagging behind de Blasio in recent public polls, but she drew close to three times Dietl’s support.

Dietl’s promised a couple of other confrontations with de Blasio tonight.  He frequently claims to know that, despite the mayor having expressly denied it, de Blasio smokes marijuana.  Dietl says he’s for legalizing marijuana and that his anger stems from what he considers dishonesty from the mayor.

Finally, Dietl says he’ll attack de Blasio as having “done nothing for the black community.”  He says that tonight he’ll “name a major leader from the black community” who shares his view and supports him.  Dietl’s had his own race-related troubles in the campaign, facing a firestorm this spring after saying that a physical resemblance between two unrelated African-American women, Mayor de Blasio’s wife Chirlane McCray and a judge hearing his ballot-related lawsuit, foretold an adverse ruling from the judge.

Dietl, well aware of his polling and finances, realistically views tonight’s debate as close to a last chance to markedly improve his campaign’s political and financial outlook.  He needs a dramatic moment to push himself toward the front of the race, and with a much broader audience than the campaign’s drawn so far this is his chance.  How emotional or how coarse he’ll be isn’t certain, and even he may not be able to fully preplan it.  He burns white-hot at times, emotion pulsating out as he tears into what he sees as wrong or unjust.  He’s capable of much cooler moments, with his own form of charisma that draws plenty of warm receptions, but his campaign is fueled by his anger at the mayor and at the melange of wrongs and pain that occur regularly in the City.  Expect that anger to be central tonight.

Here are excerpts of Dietl’s comments Saturday in Howard Beach: