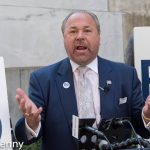 Run a tighter ship was the essence of Bo Dietl’s advice for the hosts and organizers of the upcoming and final mayoral candidate debate.  Dietl confirmed today that he’ll be in the second debate.   Republican/Conservative candidate Nicole Malliotakis has not yet met the fundraising threshold for an invitation to the debate, although she expressed optimism on Tuesday that she’ll do so.  We spoke with Dietl today during a press conference focused on the Department of Education.

The first mayoral debate, featuring Mayor de Blasio, Nicole Malliotakis and Dietl, has been widely criticized as unduly raucous, with a resulting diminishment of its value.  To many commentators Dietl was a key part of the undue raucousness, frequently interjecting as other candidates spoke and drawing several rebukes from moderator Errol Louis.

Dietl urged the host/moderator of the upcoming debate to “keep control of their own red light, green light, one two three” and strictly enforce candidate speaking time limits.  In Dietl’s view he had to interject and speak over de Blasio and Malliotakis because they “never stop.”  Dietl also criticized the audience for being loud and intrusive, suggesting that it was stacked with de Blasio supporters on the City payroll.

As I posed a separate question later in today’s press conference Dietl came back to the debate and said to a NY1 reporter “tell Errol take it easy next time, he lost control of that.”