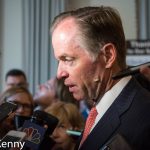 Paul Massey and Nicole Malliotakis each spoke with the press following their candidate debate today.  For Massey, it would be his final public appearance as a mayoral candidate as he issued a statement announcing the end of his candidacy a couple of hours after departing from the debate and Q&A.

Massey’s Q&A was almost entirely consumed by his assertion during the debate that the City’s ever-improving crime statistics are “fudged.”  He offered no real evidence for that assertion, repeatedly defending it only by saying that he’s heard “people on the street” express concern that it’s occurring.  It was a periodic criticism throughout the Giuliani and Bloomberg years, ranging from allegations of manipulation of incidents to place them in lower categories to outright falsification.  In the de Blasio era its been a suggestion from many of his critics, sometimes driven by a gap between the statistics and their personal observation, but often driven by a desire to support their effort at pushing him out of office.    Massey has frequently adopted that mindset, criticizing the mayor for presiding over a return to “the bad old days” of high crime despite the data demonstrating the opposite.

Malliotakis had a more wide-ranging Q&A, with topics including: her reaction to the debate, Massey’s allegation that the NYPD is “fudging” statistics, her assertion that the NYPD’s “hands are tied” by the mayor, the mayor and governor’s reaction to yesterday’s subway derailment and MTA funding and repairs, her support of a “travel ban” in light of her family’s immigration history, her path to victory and the effect of Donald Trump, and the possibility of an endorsement from Trump, on campaign in an overwhelmingly Democratic city.