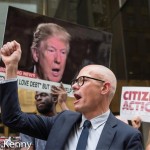 Chants of “Trump, you are not my friend” and “Donald Trump, for Wall Street” rang out this afternoon in front of Trump Tower as 40 protesters denounced Republican presidential candidate Donald Trump.  Among the topics addressed by speakers at the protest, organized by the Hedge Clippers campaign, were Trump’s fundraiser scheduled for tonight and his previous claims that he would not raise “corrupt” money, Trump’s comments on the Orlando massacre and the lack of any subsequent Congressional action on guns, the lack of action on Puerto Rico’s fiscal crisis and Trump’s recent attempts to describe himself as a friend of the LGBTQ community.  Singled out for specific condemnation were Trump fundraisers Steven Feinberg, Wilbur Ross and John Paulson. 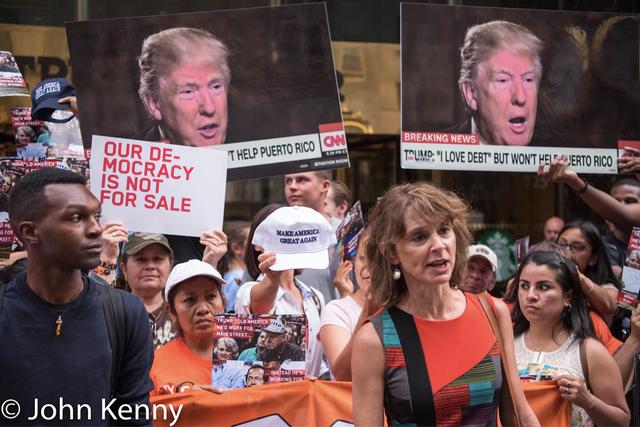 Three counter-prostesters joined the excitement, with two working their way into the group and holding their “Make America Great Again” hats out for the cameras.  The smaller and more successful of the two worked her way to the front of the group, sparking some blocking and had her hat snatched and tossed aside.  A third counter-protester appeared at the conclusion of the protest, carrying a sign declaring that “Obama + Hillary Support Slavery.”  It seemed to be Obamacare related, but that’s not entirely clear. 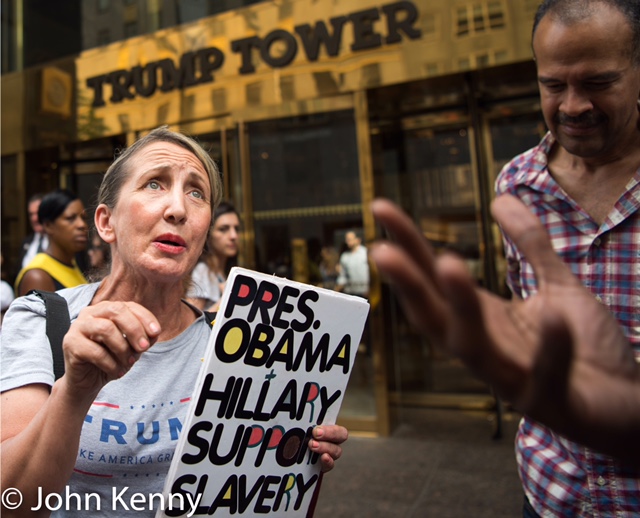