“I find them a little scary” said Eva Moskowitz about the protests she attracts.  Her City Hall press conference announcing that she will not run for mayor in 2017 unsurprisingly attracted a group of 20-25 protesters to the adjacent City Hall Park.  Their chants and shouts filled City Hall Plaza throughout her press conference, making it tough to hear the questions and answers.

In a stroke of good timing Moskowitz and one companion departed as the protesters chanted “hey hey, ho ho, Eva Moskowitz has got to go.”  She gave them a brief wave and kept walking, headed out to Broadway and back to work. 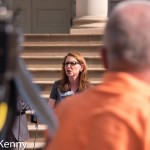