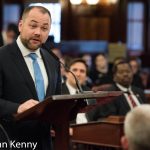 
On Wednesday Mayor Bill de Blasio worked to turn attention away from his troubled relationship with the NYPD and toward one of his successful initiatives, highlighting significant improvements to an historically dangerous intersection with a visit to the redesigned and rebuilt intersection of East Tremont Avenue and Silver Street in the Bronx neighborhood of Westchester Square.  The redesign and rebuild is part of his administration’s Vision Zero initiative.

The on topic Q&A included redesign plans for other streets, especially Queens Boulevard, why the administration attributes the reduction in pedestrian fatalities to Vision Zero and not to regular year-to-year variances, how the administration actually knows that driving speeds are reduced, why so few street redesign projects have been done on Staten Island, data for any changes in safety at this E.Tremont/Silver Street intersection, why Commissioner Bratton did not attend, why there are few speeding and failure to yield tickets issued in this (45th) precinct, the negative effect of speed bumps on emergency response vehicles, plans for marking and painting of roads, whether the mayor will seek additional red light camera authorizations from the state legislature, the paucity of criminal prosecutions against drivers who kill pedestrians and an estimate of money received from speed camera tickets.

The off topic portion of the press conference substantially focused on de Blasio’s continuing friction with the NYPD and the PBA.  Question topics included the recent rollout of the City’s municipal ID program, an internal PBA meeting reported to have degenerated into yelling and shoving over PBA President Pat Lynch’s demands for an apology from the mayor and whether that provided “consolation” to the mayor, whether he takes comfort from the low number of PBA members reported to have signed “stay away from my funeral” statements, Bratton’s comment that the “well was poisoned” by de Blasio’s bring of former Sharpton aide Rachel Noerdlinger, a potential Teamsters strike at Hunts Point market, Governor Cuomo’s consideration of legislation allowing public access to grand jury minutes, the mayor’s objections to a City Council proposed bill outlawing police use of chokeholds, a reported Cuomo/Lynch meeting and what role the governor should fill in the Lynch/de Blasio dispute, whether the mayor is willing to acknowledge “missteps”, the reports of Legionnaire’s Disease in Co-op City, de Blasio’s reaction to a possible 2016 Mitt Romney candidacy and when he last spoke with the Rev. Al Sharpton.


Today Melissa Mark-Viverito was elected speaker of the New York City Council,  prevailing over Council Member Dan Garodnick in what was initially a seven person contest.

Six council members were defeated by Melissa Mark-Viverito in the quest to be speaker.  We look at what those six said at the council meeting.

Three of those six members made extended remarks.  Here are full statements by:


This afternoon we spoke with Council Member Melissa Mark-Viverito about the speaker’s race.  Mark-Viverito is the leading contender, and presumptive speaker, with the public support of 30 of her 50 colleagues.  Despite that public display of more than sufficient support, Queens Democratic Chairman Joe Crowley, who supports Dan Garodnick for Speaker, recently declared that the race “has a ways to go” and said that Mark-Viverito’s public display of support “reminds me a little bit of George Bush on the aircraft carrier.”

I began by asking Mark-Viverito whether she believes the race has concluded or whether Crowley or others are still actively seeking votes for any other candidates.  We spoke at the swearing-in ceremony of Council Member Ydanis Rodriguez, held in his Washington Heights district office.


Congressman and Queens County Democratic chair Joe Crowley answered reporters questions concerning the selection of the next speaker of the city council.  Crowley has reportedly worked in support of Dan Garodnick for speaker.


We spoke with Council Member Ydanis Rodriguez about the selection of the next council speaker.  Rodriguez is a member of the progressive bloc and a strong supporter of Melissa Mark-Viverito.  We spoke outside the National Action Network’s House of Justice, following a visit by Mayor-elect Bill de Blasio and his police commissioner designee, Bill Bratton.

Be sure to watch our coverage of all seven speaker forums, held on Staten Island, in Manhattan at the Talking Transition Tent, Baruch College and New York Law School, as well as in Brooklyn, the Bronx and Jackson Heights. Our coverage includes conversations with many council members/member-elects about the selection process, including, in addition to Ydanis Rodriguez, Vincent Ignizio, Steve Matteo, Debi Rose, Corey Johnson, Karen Koslowitz, Andrew Cohen, Brad Lander, Carlos Menchaca, Ritchie Torrres and Helen Rosenthal.


At a City Hall press conference this afternoon, Capital New York reporter Sally Goldenberg asked outgoing Council Speaker Christine Quinn for her thoughts on the prospect of the council selecting a speaker who does not support marriage equality.  Here is Speaker Quinn’s response.

Earlier, we asked Council Member and speaker contender Jumaane Williams about the weight that his fellow council members should give to his positions on marriage equality and abortion rights in selecting the next speaker.  Williams is alone among the announced speaker contenders in opposing both.


Council Member, and speaker contender, Mark Weprin has a long family history in politics and government.  His late father, Saul Weprin, was speaker of the New York State Assembly.  Mark Weprin was elected to fill his father’s assembly seat, serving for 15 years before being elected to the City Council.  Mark’s brother David currently serves in the Assembly, having previously been a member of the City Council.

Following a speaker candidate forum at New York Law School, I asked Mark Weprin how his father’s experience as speaker of the Assembly informs or influences how Mark thinks about the similar position of City Council speaker.  With his brother standing by his side, Mark Weprin shared some thoughts.