Eliot Spitzer voted this afternoon in a prototypical Spitzer event: arrive on-time, take care of the business at hand expeditiously and move on.  He arrived right on time at his polling place, Manhattan’s P.S. 6, went inside, voted and came out.  Total time from arriving at the school steps to back in the car, including a 1/2 block walk?  About 7 minutes.  That includes just over 1 minute talking to the press.  You can watch that 1 minute press availability right here.

The only glitch?  A reporter, from the New York Post I believe, wanted to ask “where is your wife?”  Here’s what happened.


We spoke with Assembly Member Keith Wright this morning concerning the mayoral and comptroller races.


As Scott Stringer was endorsed by a group of about 50 clergy from around the city, he touted his plan to appoint a chief diversity officer in the comptroller’s office and to pursue diversity goals for businesses and city agencies.  Seemingly implicit in his plan was the premise that recent comptrollers have not done enough on these goals.  I asked Stringer for his view of how the two most recent comptrollers, John Liu and Bill Thompson, have performed on these issues.

During the walk, I asked Spitzer about what his family-owned real estate business does to facilitate hiring M/WBE contractors.  His answer was somewhat vague, beginning with “we haven’t built in a couple of years”, with the apparent implication that they would specifically seek, or be able to, to hire M/WBE businesses only as part of construction projects.  Watch.


Scott Stringer and Eliot Spitzer fought their way through Round 3 of their televised debates last night, participating in a debate organized by the NYC Campaign Finance Board and broadcast by WCBS-TV (CBS 2).  Moderated by Marcia Kramer, with panelists Rich Lamb and Marlene Peralta, the debate was co-sponsored by WCBS Newsradio 880, 1010 WINS, El Diario/La Prensa, and Common Cause/NY.  They returned to now-familiar jabs at each other (think “resigned … prostitution” and “3rd term”), but still managed to discuss some substance of the office that they’re seeking.  The entire debate is available here.

They also had a few odd moments which have captured media attention.  Moderator Marcia Kramer asked both to sing a line from their favorite song.  Stringer recited the opening line from his favorite (Heroes by David Bowie), while Spitzer named his favorite, but declined to sing or recite (Land of Hope and Dreams by Bruce Springsteen).  (Editorial note: NYTrue.com heartily approves of both choices.)  In responding to Rich Lamb’s question of “is there something nice you can say about your opponent”, Scott Stringer tried to give a friendly response, saying “we are definitely going to hang out after” the election and that as part of that “hang out” Spitzer could “help babysit my two kids.”

Here is Scott Stringer’s full Q&A with the press following the debate.  Among the topics discussed: Spitzer’s statement that he would serve for $1 per year if elected, the candidates’ singing ability (it was part of the debate, believe it or not), how his experience may prepare him to manage the very large staff of the comptroller’s office, his views on Assembly Speaker Sheldon Silver and the sexual harassment scandals that have occurred in Albany, the revelation that he refers to “Eliot Weiner”, and much more.

Here is Eliot Spitzer’s full Q&A with the press following the debate.  Among the topics discussed: Stringer’s babysitting invitation, Mayor Bloomberg’s 3rd term, Spitzer’s statement that he would serve for $1 per year if elected and Stringer’s description of Spitzer as living in an “ivory tower.”

I asked Pataki how he feels about the return of his successor, Eliot Spitzer, to electoral politics.

I asked former congressman Vito Fossella, who resigned in his own sex scandal, for his reaction to the candidacy of Eliot Spitzer and Anthony Weiner. 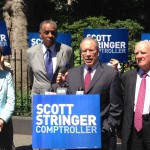 One of Stringer’s main lines of attack in his comptroller race against Eliot Spitzer has been Spitzer’s decision to not participate in the NYC campaign finance system and to instead self-fund.  Stringer lauds the campaign finance program and publicly urges Spitzer to abide by the program’s spending limits. END_OF_DOCUMENT_TOKEN_TO_BE_REPLACED


We caught up with Eliot Spitzer last night, while he was campaigning in Flatbush.

I asked Spitzer about the recent Fred Dicker column in which Dicker reported that “[a]n increasingly nervous Gov. Cuomo” is considering acting to try to block a Spitzer victory, and whether there’s any reason that Governor Cuomo should worried about the prospect of a Spitzer victory.

Here’s a brief clip of Spitzer with people on the street.


Scott Stringer and Eliot Spitzer slogged through Round 2 of their slugfest Monday night.  They participated in a debate organized by the New York City Campaign Finance Board and moderated by Errol Louis and Brian Lehrer.  As widely reported, the candidates were  notably aggressive, sparring the full length of the debate, and continuing to trade jabs afterwards.

Following the debate, the candidates separately spoke with the media.  We have the full availability for each candidate,


The Democratic candidates for comptroller smiled and punched their way through their first debate yesterday.  Hosted by WABC-TV 7, along with co-hosts Noticias 41 Univision, the Daily News and the League of Women Voters of the City of New York, it was the first campaign encounter between Scott Stringer and Eliot Spitzer.  The race is essentially a referendum on Eliot Spitzer, both his past and his prospective suitability for the comptroller’s office, and both candidates approached the debate that way.  Stringer repeatedly raised Spitzer’s prostitution scandal, with additional attacks on his shortcomings as governor.  Spitzer countered by focusing on his record as attorney general, particularly his Wall Street cases.

At the conclusion of the debate, both candidates separately answered media questions.

Here is Eliot Spitzer’s full availability.  It begins with a little bit of a media rush, prompting Spitzer to remark that “this feels like Union Square again.”  Once things were sorted out (and our camera in place), Spitzer answered questions on topics such as Scott Stringer’s attacks, how much money Spitzer actually plans to spend on the campaign and criticism from Crain’s.

In this excerpt from Scott Stringer’s availability he answers questions from Josh Robin of NY1 and Marcia Kramer of WCBS-TV concerning Stringer’s initial pledge to not discuss Spitzer’s “personal life” and his more recent move to focus on Spitzer’s patronizing of prostitutes five years ago.  As Stringer notes, “maybe I have a different view of what constitutes personal life.”

Here is the full recording of Scott Stringer’s media availability.


Yesterday evening Eliot Spitzer successfully walked around 149th Street and Third Avenue in the Bronx.  “Successfully” in that he actually was able to walk and talk with people on the street, unlike his campaign-launching media maelstrom in Union Square two weeks ago.  He received a very positive reception, with many people recognizing him, wanting a picture with him and professing past or future votes for him.

There’s no way of knowing how many of the people he spoke with are registered Democrats, and how many will show up to vote for him on September 10th, but his campaign would be rightly encouraged by the short stroll.  High recognition, positive comments, smiles all around and virtually no heckling or objections from passersby made for a successful visit.

In an unexpected turn of events, the media and public focus on Anthony Weiner and the latest revelations of his sexting seem to be indirectly helping Spitzer.  It’s given Spitzer a chance to begin a more normal campaign as the media and public onslaught returned to Weiner and his disingenuousness.  The Weiner saga has become a tale of ongoing uncontrollable compulsion, with the previous neat storyline of “I did wrong, but learned my lesson” shattered.  Spitzer and his personal troubles suddenly seem more comprehensible, less bizarre by comparison and, absent any new disclosures, in the past.  What will happen when the Weiner focus fades?  Will media and public attention turn to Spitzer’s past personal behavior with renewed energy?  Or will some sense of exhaustion with the tawdry move the comptroller’s race focus to the office and the candidates’ plans and qualifications?  Stay tuned.

Here is a special condensed edition of Spitzer’s walk.  And we do mean condensed.  Watch – you’ll see.