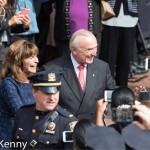 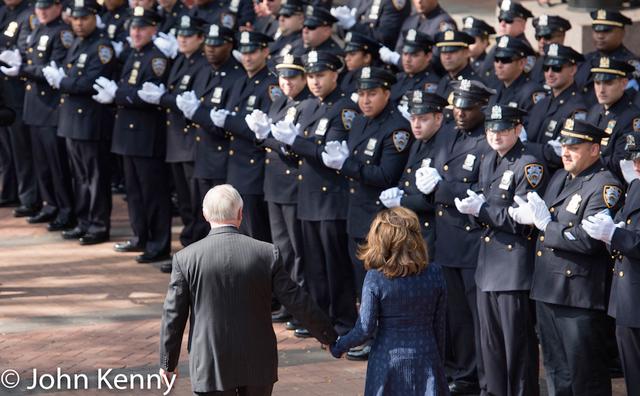 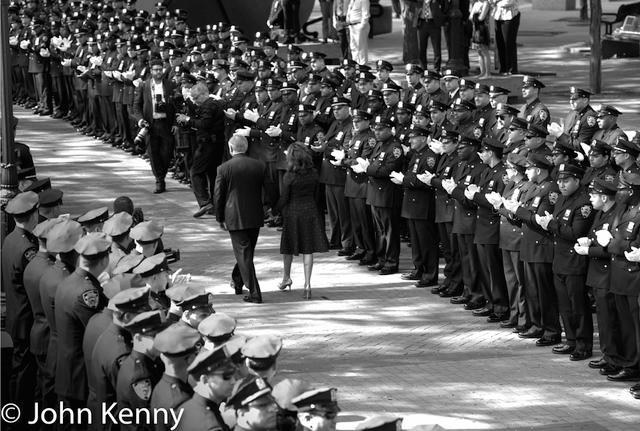 From Mayor Bill de Blasio’s Monday press conference, Mayor de Blasio and Police Commissioner Bratton’s comments on homelessness and begging.  Among their responses was Bratton’s statement that New Yorkers should discourage begging by not giving money to people doing so.  de Blasio and Bratton were responding to a question from Marcia Kramer, with a photo she provided, on a specific person begging on the Upper West Side and why the NYPD did not address the situation.


Mayor Bill de Blasio joined Police Commissioner Bill Bratton and several senior NYPD officials at One Police Plaza today for a press conference touting remarkable crime statistics for 2014 and discussing the mayor’s troubled relationship with many in the NYPD.  The mayor and commissioner began by proudly discussed the NYPD’s accomplishments in pushing crime numbers lower than the record-setting 2013.

The Q&A was quite lengthy, running almost 40 minutes.  The Q&A included detailed discussion of the 2014 crime stats and a discussion of two specific cases: a Manhattan man allegedly shot by his adult son while in his Beekman Place apartment and the Manhattan DA’s decision to not charge Sandford Rubenstein in connection with an alleged rape.  The mayor and police commissioner also addressed the mayor’s friction-filled relationship with the PBA and rank-and-file police officers and the recent episodes in which police officers turned their back on Mayor de Blasio at the funerals of murdered NYPD detectives Rafael Ramos and Wenjian Liu.

An excerpt featuring Mayor de Blasio’s and Commissioner Bratton’s statements on police officers turning their back to the mayor is here.


Mayor Bill de Blasio and Police Commissioner Bill Bratton today addressed the widely reported actions of hundreds, perhaps thousands, of police officers who turned their backs when Mayor de Blasio spoke at the funerals of Detectives Rafael Ramos and Wenjian Liu.  Speaking during a press conference at One Police Plaza de Blasio termed their actions “disrespectful to the families” of Ramos and Liu and “disrespectful to the people of this City.”  Bratton’s reaction was harsher, condemning “a labor action being taken in the middle of a funeral” by officers who “embarrassed themselves.”  He also condemned “the selfishness of that action” which “took so much attention” away from the slain detectives.


Mayor Bill de Blasio and Police Commissioner today announced a significant change in the NYPD’s handling of people possessing small amounts of marijuana.  Possession of 25 grams or less will now be generally handled by the NYPD issuing a summons, rather than arresting the possessor.

de Blasio and Bratton had a lengthy Q&A, with it almost entirely focused on their announcement.  Here’s their full on-topic Q&A:


Mayor Bill de Blasio and Police Commissioner Bill Bratton held an unusual Sunday afternoon press conference to denounce a New York Post report that de Blasio’s wife, Chirlane McCray, was deeply angry at Bratton over NYPD Chief of Department’s Philip Banks’ sudden retirement and that de Blasio had “summoned Bratton to City Hall, blasting him face to face for not catering to Banks”.  The Post quoted McCray as saying “I told you we can’t trust him”, in reference to Bratton, to de Blasio.

de Blasio profusely praised both the NYPD and Bratton, and then denounced “unnamed sources who make up entire conversations in their heads and tell flat-out lies.”  Bratton in turn praised the mayor and condemned the “falsehoods” and “fabrications” as “nothing short of outrageous” that were “intentionally intended to harm.”


Mayor de Blasio and Police Commissioner Bratton escorted Police Officer Rosa Rodriguez out of the hospital today, 43 days after she was critically injured in a Coney Island fire that killed her partner, Police Officer Dennis Guerra.

Neither de Blasio or Bratton spoke with the press.


Mayor Bill de Blasio and Police Commissioner Bill Bratton visited the Police Academy this afternoon, addressing police cadets and holding a press conference.  The condition of Officers Dennis Guerra and Rosa Rodriguez, gravely injured in a Coney Island fire, was a focus of both segments of their visit.

Here are the remarks from the mayor and police commissioner to the class of approximately 200 police cadets:

Following a brief opening statement by the mayor, he and the police commissioner answered “on topic” questions only, although what constituted “on topic” was a bit vague.  Questions included NYPD procedures governing officers entering burning buildings, whether clergy have been called in for the two officers, what community/police “healing” Mayor de Blasio believes is occurring, whether there is a need for a larger headcount in the Department, why one of the injured officers was transferred to a different hospital, Bratton’s reaction to pictures of the accused arsonist smiling, whether a decision has been made on the future of the building that the Police Academy is currently located in, whether the escaped prisoner in the 78th Precinct has been recaptured and whether the officers involved will be disciplined and whether the Fire Department will be involved in creating a Police Department policy governing officers entering burning buildings.

Here is their full Q&A:


This afternoon Mayor Bill de Blasio and Police Commissioner Bill Bratton visited the NYPD’s 25th Precinct, located on Harlem’s 119th Street.  The mayor lauded the police generally, and specifically commended the two rookie officers involved in a shooting yesterday in Bed-Stuy.  One of the officers was shot multiple times and his partner was key to apprehending the perpetrator.  de Blasio also lauded a civilian who recently assisted the NYPD in apprehending a rapist in the 25th Precinct.  de Blasio announced “seven steps to positive community interactions”, a protocol intended to improve interactions NYPD officers and civilians.

Full Q&A:
Question topics during the on-topic portion of a Q&A session included outstanding warrants on the shooting suspect, whether the mayor’s view of the police has changed since he took office and whether he still views himself as a police “watchdog”, how the seven steps will be communicated to police officers, a weekend attack on the 7 train, the background & origin of the seven steps, whether assignment rules will change to prevent the pairing of two rookie officers as occurred in the Bed-Stuy shooting, the current condition of the wounded officer, warrant enforcement procedures and current NYPD plans on instituting body-worn cameras.  Topics during the off-topic portion of the Q&A session included whether Commissioner Bratton will march in the Manhattan St. Patrick’s Day Parade, when the mayor will move to Gracie Mansion, several questions concerning the de Blasio administration’s reversal today of three school co-locations for Success Academy previously approved by the Bloomberg administration and whether the City will consider joining a CFE successor lawsuit.  Here is the full Q&A.


Today Mayor Bill de Blasio announced a significant turn in the ongoing litigation over the NYPD’s stop & frisk practices.  The City has agreed with the plaintiffs in Floyd v. City of New York to changes including a three year period for a monitor to oversee the stop & frisk policy.  Once a full plan is agreed to and approved by the court, the City will withdraw its pending appeal.