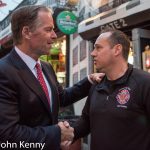 Bronx Chairman Rendino began by saying that his number one focus is defeating Bill de Blasio and in making his decision he looked for a “true leader” who can lead the Bronx out of what Rendino described as a deteriorating quality of life.  Prior to the press conference this evening Azi Paybarah reported that Rendino’s decision was driven by the Manchester bombing, and his consideration of who would be the best mayor in such circumstances.  Massey does not have any uniformed service, emergency management or government experience, so it’s somewhat unclear what drove Rendino to that conclusion.  Rendino response, when I asked tonight, simply characterized Massey as prepared and knowing what he’s doing based on his business success and the campaign infrastructure that he’s built.

Rendino concluded his introduction by noting that Mayor de Blasio, like Massey born and raised in Massachusetts, refused to put on a Yankee hat this week.  He then offered Massey a Yankee hat, which Massey put on with a smile.  When I asked Massey about his Red Sox affinity he described a switch in loyalty when he moved here, calling it “kinda weird” for the mayor not to root for New York teams after 30 or 35 years in New York.

Massey said that he will not march in the Puerto Rican Day Parade in response to the Parade Committee honoring Oscar Lopez Rivera, but that he does plan on attending.  He responded harshly to a Malliotakis campaign statement suggesting that Rendino may have endorsed Massey for less-than-legimate reasons, calling on the five County chairs to demand an apology from Malliotakis.

Both Massey and Rendino avoided directly responding when asked about the proposed budget recently released by the Trump administration and Mayor de Blasio’s comment that children will die as a result.  Massey attacked the mayor as divisive and using dangerous rhetoric while promising that “we’ll make sure everyone who has healthcare now will have healthcare.  Rendino referred to concerns about that proposed budget as “fear mongering,” casting the budget as a “first offer” that must be negotiated.

Rendino said that he has not asked Massey for any specific policy commitment.  Both Rendino and Massey said that the only campaign financing provided or committed by Massey was a sponsorship of the Bronx Republicans annual dinner in March.

Here is the full press conference – questions begin at 5:20: