Here’s a Bo Dietl update on his mystery tweet and continuing court case. 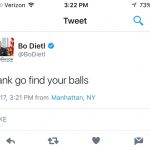 This afternoon Dietl mysteriously tweeted “Frank go find your balls.”    Who’s Frank? replied Dietl when I asked him about his tweet, adding that “I don’t remember” tweeting that.  Dietl accurately noted that he had tweeted at Mayor de Blasio several times this afternoon, but said he had no recollection of the tweet in question.  As he mused about what he might have meant Dietl offered that he often uses the phrase “go find a can of man,” rather than the expression in his tweet.  He also observed that “there’s a lot of Franks who are gonna wonder.”  The tweet has been deleted.

Dietl, who had initially tried to switch his party registration from Republican to Democratic in order to run for mayor in the Democratic primary, has an ongoing court case seeking reinstatement in the Republican Party.  (His comments on Mayor de Blasio’s wife and the NY Supreme Court justice hearing his case at trial level provoked a firestorm.)  Such a reinstatement would allow him to run in the Republican mayoral primary.  Dietl and his lawyers expect an appellate decision next week (June 7th) I’m told. Petitioning begins Tuesday, so should he get a favorable ruling he’ll be behind schedule. Dietl expressed confidence that his campaign will be ready to petition, however, should they win in court. He also reiterated his oft expressed intention to run solely on his own line should his lawsuit fail.